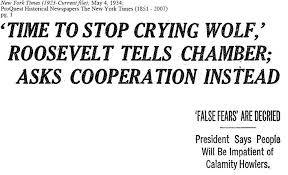 The stock market reaction to the 16-day government shutdown and threat of a default on all U.S. government budget obligations (Social Security checks, interest payments on government bonds, payments under contract to suppliers and contractors, etc. etc.) was stunningly mild.  In fact, despite all the dire warnings and hints from the Democratic side of the aisle that the markets should send a loud message to the Republican party, they never did.  Investors, for the most part, saw the whole shutdown/default charade for what it was: something that a majority of our elected representatives would eventually have to decide to work out.

Obviously, the markets did not listen to the talking heads, who last weekend were predicting the markets would tank this week and, as one promised, “we are going over the cliff.”

Instead of the markets tanking, over the 16 day shutdown the markets actually went up!  Compared with the naked fear that the Fed would stop intervening in the bond markets, the response to closing down the largest payroll on the planet and threatening to send the global economy into a tailspin registered not even a yawn.

Nevertheless, there were costs involved.  The Standard & Poors organization recently calculated that the shutdown cost the U.S. economy $24 billion–or about $1.5 billion a day.  An estimate from Moody’s Analytics similarly put the figure at $23 billion–and this doesn’t count lost productivity.  Hundreds of thousands of furloughed government workers are going to paid for their two-week-and-two-day vacation even though they did nothing productive.  All those tourists who would have visited national parks and purchased hotel rooms and restaurant meals didn’t.  The ripple effect of thousands of government contractors twiddling their thumbs hopefully is hard to calculate.

Perhaps the biggest cost, if we ever get a final tally, will be the interest the U.S. government has to pay on its debt.  Bond dealers were reporting weak demand for Treasury bonds at auction across the full spectrum of maturities in October, as investors demanded higher yields to cover the threat of default.  Since the recent budget deal only lasts until January 15, and the debt ceiling will be again breached on February 7, 10-year government bond holders could conceivably be looking at ten more opportunities for default before they get their money back.

The U.S. and world markets rose on the news that the government standoff had ended, but that doesn’t rule out a pullback at some point in the near future.  Eventually, investors are going to realize that shutdown and default debates could become an annual event.  This is ironic, because, absent the squabbling in Washington, the U.S. economy seems to be healing nicely–if not quickly.  Just before its staff was sent home for the shutdown holidays, the Federal Reserve Bank of Chicago released its latest report on the state of the economy, saying that consumer spending continues to increase, business spending is up and manufacturing activity has expanded.  Most economists on the talking circuit these days seem to expect that the U.S. economy will show 2% growth for the year, down from closer to 3% estimates before the shutdown.

One Response to A collective yawn