What the heck is going on in Turkey? Whatever it is, it’s having a visible effect on the markets. After the Turkish stock market index fell more than 24% since the start of August, Eurozone bank stocks fell 24% and emerging markets stocks overall (a category which includes Turkish stocks) dropped 9.9% for the year. A number of non-major currencies, including the South African Rand, Argentine peso, Russian ruble, Hungarian forint, Polish zloty, Brazilian real, and Mexican peso were also down sharply, as was one major currency: the euro. 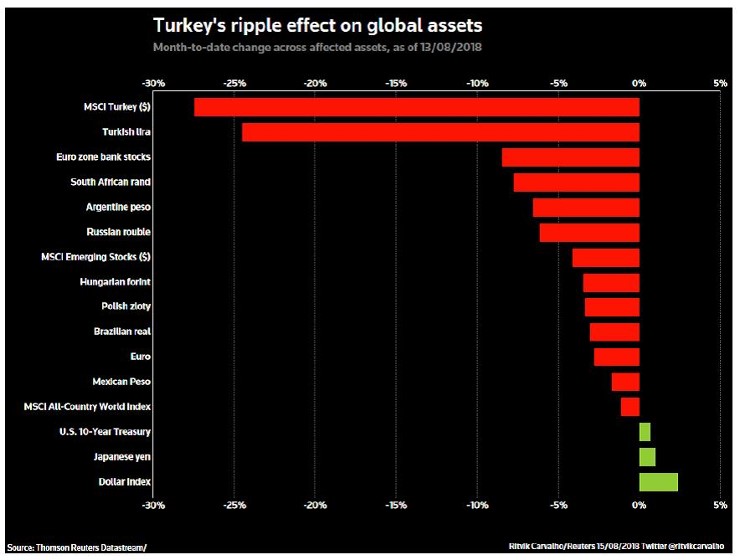 The crisis was triggered when Turkish officials detained, and ultimately imprisoned, an American evangelical pastor named Andrew Brunson, accusing him of being a spy who was attempting to overthrow the Turkish government. Before being detained, Brunson had been working as a pastor at the Izmir Resurrection Church, as a 23-year resident of the country. His trial is set for October.

American diplomats have been pushing for Brunson’s release, saying that he is basically on trial for his faith, not for any nefarious spying activities. When the negotiations failed, the Trump Administration surprised Turkey and the rest of the world by imposing economic sanctions against what most would consider to be an allied government—a fellow NATO member whose Incirlik air base was a crucial staging ground for the air war against the Islamic state.

The sanctions were clearly the trigger event for the collapse of Turkish stocks and the Turkish lira, but some analysts say the country was long overdue for some kind of negative event in the Turkish economy. In recent years, Turkey has been compared to Greece for having amassed one of the largest foreign debts in the world, as its banks and large companies have borrowed heavily to maintain activity in the economy. Foreign investment has dramatically slowed, in part because the country’s authoritarian government seems often inclined to meddle in monetary decisions. Those concerns were not exactly allayed when, in response to the crisis, Turkish president Recep Tayyip Erdogen squeezed central bank liquidity and doubled the interest rate cost in his country, in a single day, and then, by fiat, changed the rules so that speculators were no longer allowed to sell their dollars or euros in what are known as currency swaps. Banks were forced to stop lending lira or renewing any existing contracts.

In addition, Erdogen lashed out by doubling Turkish import tariffs on passenger cars to 120% of their value, plus a 140% tariff on alcoholic drinks and significant tariffs on tobacco, cosmetics, rice, and even coal. In a subsequent speech, the Turkish president called for a citizen boycott of U.S. electronic products, including the iPhone.

Is there any way out of this mess? It seems clear that the Turkish government is backed into a corner, not wanting to look foolish or weak by releasing its American pastor. They surely know that if or when they do, President Trump will do a very public, and humiliating, victory dance on the world stage. We may see some kind of quiet prisoner swap involving persons detained by the Israelis, but that could be months or years down the road.

In the meantime, the Turkish lira stopped its precipitous slide only when the oil-rich nation of Qatar stepped in to offer financial assistance in the form of a $15 billion loan. This mess is going to blow over, but not without a few more scary headlines to come.

106 Things We Do For Clients, No. 90
US Health Care Costs: Highest in the World?