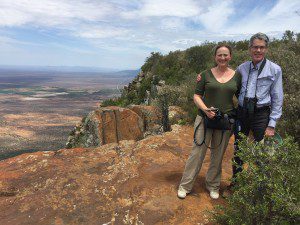 South Africa is on  sale! Marcia and I just returned from a week in the bush country of South Africa, and we had an experience incomparable to anything we’ve done previously in our travels.

Most of our time was spent staying at game reserves. For me, the experience was more like staying in the middle of an ecological zoo where the animals ate each other rather than food brought in by zookeepers. After the sun went down guests had to be escorted from the main lodge to their rooms (more like elegant huts) by a ranger. We understood why after the first night when we were awakened suddenly by the roar of a lion outside our hut! 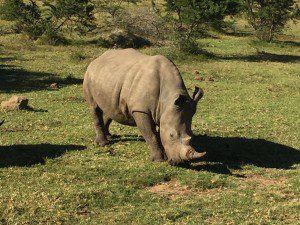 We did several “bush walks” where we got eye to eye with a white rhinoceros and a cheetah. It’s fairly surreal being that close to a wild animal, one with a very sharp horn and another with sharp claws….and without a gun for protection.

After tracking on foot and drawing close to the rhinos, the guide said, “If we stand here they will probably get curious and come over to us. Whatever you do, don’t turn your back and don’t run. If they charge, drop to the ground, they won’t trample you like an elephant will.” Somehow this information didn’t relieve my anxiety.

Indeed one of them did come over to us.  I tried to stay present while feelings of awe and terror surged through me as one rhino would draw close, spin around and walk away and then repeat the process of drawing close again. After 15 to 20 minutes of this we decided it was time to go. After we were a distance away I asked 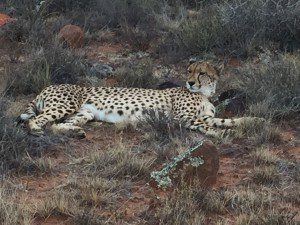 the guide how close the rhino came to us. “About two meters.” The next day we were able to track down and get just as close to a cheetah.

Another highlight of the trip was the cost. We were able to snag round trip tickets for about half of the normal fare (what I pay to go any major city in the US), and the lodging and food was relatively inexpensive due to the strength of the dollar. For example, we had a four course tasting meal with a paired wine with every course, which would have cost $150 to $400 in various cities, for $24. Our 4 star hotel in Johannesburg was $65 for a night. 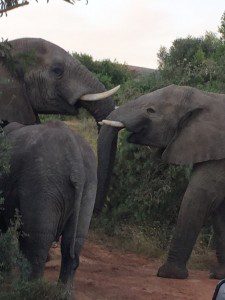 Fortunately, all of the game lodges we stayed at had wifi that actually worked. I was able to stay in close communication with the KFG staff, respond to client emails, and teach my master’s course at GGU without much interruption. While I know some of you may recoil at the thought of spending time answering emails on a vacation, the ability to do so is the major reason I can travel and have these experiences.

We spent a day in Johannesburg learning about 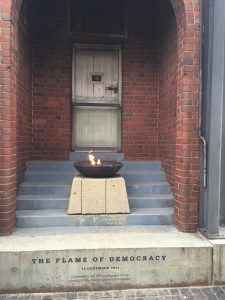 Apartheid and visiting all the historical sites of that revolution, including a trip to Soweto.

Our intention is to return to South Africa and visit Cape Town and the wine region surrounding it. We want to go soon, before the dollar reverses course….which will happen.