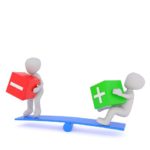 Index investing is boring, right? This seems especially true with the large cap indexes like the S&P 500, which includes big permanent, stable titans of the global economy. Not much changes from year to year, decade to decade.

These small incremental changes can add up over time. Imagine if you had fallen asleep in 1955 owning equal shares of each company in the Fortune 500 (the S&P index didn’t exist then) and awakened last year, whereupon you immediately checked your holdings. You’d be startled to realize that only 60 companies on today’s list were among the 500 companies on the 1955 one. Some were merged away, some fell down in the ranks, and many name brands of the time—like Armstrong Rubber, Cone Mills, Hines Lumber, Pacific Vegetable Oil, and Riegel Textile—are distant memories.

The point here is that, long term, there is nothing especially stable about the hierarchy of large companies in the U.S. or global economy. We don’t know which will be the major corporate titans of tomorrow’s economy, just like nobody back in the 1950s could have predicted Facebook, Twitter, Apple Computer or Microsoft. This is exactly why we buy index funds or diversified portfolios. Nobody knows which individual companies will rise from obscurity or become the next Pacific Vegetable Oil.

The Cost of Procrastination
Stock Market Predictions–Experts Don’t Know, Either