But has the rest of the world seen comparable growth in corporate value? Not even close. A recently published series of charts shows that the German and Hong Kong indices have been somewhat competitive with the primary U.S. index, with 820% and 824% growth over the last 30 years, respectively. But other countries show a shocking lag. Most shocking of all is Japan, whose Nikkei 225 Index gained just 1% during America’s ten-fold rise (see chart). 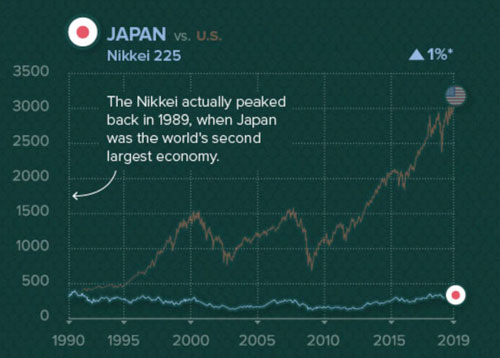 The United Kingdom did somewhat better over the past three decades, with a 238% gain, and France saw a slightly-less-meager 268% increase (see charts). 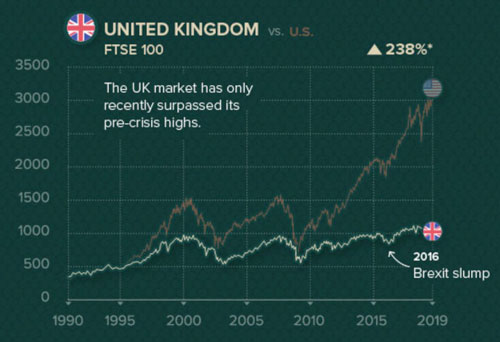 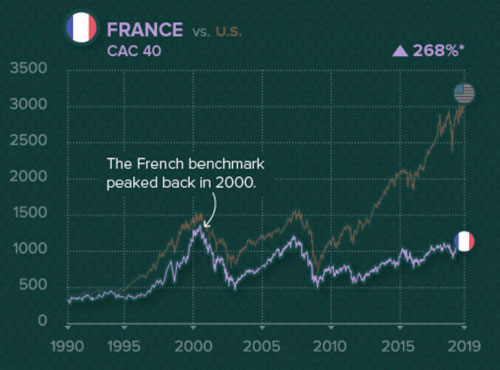 Even though many market watchers still shudder at the memory of the 2008-2009 meltdown, the charts show that American stocks recovered much more broadly and quickly compared with its foreign rivals, testing new highs at the end of 2019.

What does that mean for the future? Unfortunately, looking backwards doesn’t tell us anything about what’s ahead. The long rise in American stocks has caused them to be pricier than their counterparts in other countries, and history tells us that buying at a discount is a better investment strategy than buying at a premium. But it’s also possible that the American economy will outpace its overseas competition, leading to new highs. For now, the best we can do is celebrate a long, choppy ride to some great long-term returns for investors in American stocks, as well as offer our condolences to foreign investors who were not quite so lucky.