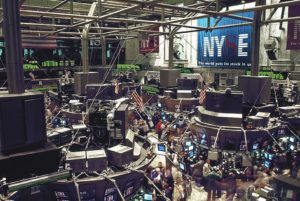 If you’re a dedicated market geek with plenty of time on your hands, you can uncover some really interesting things about stock market history and—perhaps—learn some interesting lessons from them. Thus Michael Batnick, of Ritholtz Wealth Management in New York, took a deep dive into the numbers, and these are some of the things that he found.

Since 1916, the Dow Jones Industrial Average (which predates the S&P 500 index, and has performed very similarly through history) reached new all-time highs on fewer than 5% of all market days. Think about that: during a time period when the index has delivered 25,568% positive returns, investors have been underwater 95% of the time. Since 1970, the Dow has grown at less than .03% a day—but through the powerful magic of compounding, that has resulted in a 3,000% total gain.

If you’re the sort of person who might be inclined to bail out during a market decline, then Batnick points out that 20.6% of the time—while these incredible long-term returns were being generated—the Dow was down 40% or more from its highs. His comment: “no pain, no gain.”

If you’re convinced that gold is the ultimate hedge against inflation and a darned good investment for the long term, Batnick offered some statistics that don’t exactly back up the argument. He noted that since 1980, gold has risen 153% in value, while inflation, over the same time period, has risen 230%. A better inflation hedge? Gold and the Dow were both around 800 in 1980. Today, gold trades at $1,300 an ounce while the Dow is, as mentioned before, over 25,800.

Nevertheless, Batnick notes that most of the gains in the equities markets are generated by a small handful of the wide universe of stocks—and of course, it is impossible to know in advance which ones will be home run investments. His statistic: 96% of U.S. stocks generated a lifetime return that matched one-month T-bills—the safest and lowest-returning investment you could put your money into.

You can find the whole list of amazing facts at theirrelevantinvestor.com. They are, indeed, crazy—and also entertainingly informative.