If you’re looking for something to worry about, consider corporate debt: $1 trillion of it. Research by the Bloomberg News organization found that corporations have taken advantage of more than a decade of historically low interest rates to make highly-leveraged acquisitions, taking on debt at unprecedented rates. Looking at some of the biggest acquisitions, the researchers found that companies routinely borrowed two to six times their annual earnings—guaranteeing that they will struggle to pay back their bondholders—and yet their debt has continued to be rated investment-grade by the ratings services. 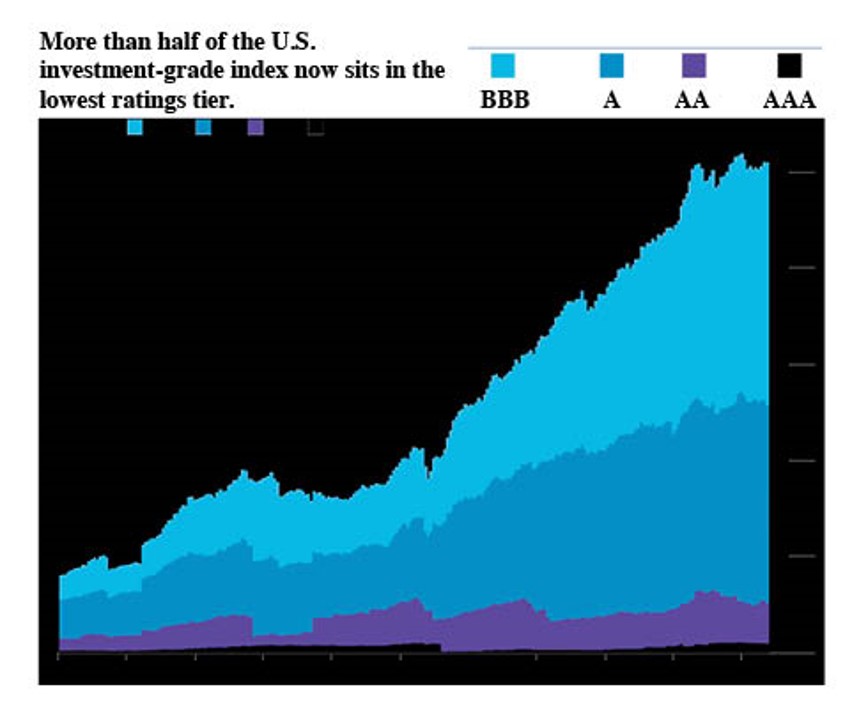 An example is Campbell Soup Company, which borrowed more than $6 billion to buy Snyder’s-Lance Inc., which makes the kind of snacks you buy in vending machines. The result: Campbell ended up with a total of $10 billion in debt, more than five times as much as its earnings before interest, taxes, depreciation and amortization—an earnings metric known as Ebitda.

So its bond ratings went down to junk level, right? Wrong. Moody’s and S&P, the two major bond rating agencies, kept Campbell at investment-grade, saying that they expected the merged company to generate enough revenue to pay down the debt quickly.

Other examples: Dr. Pepper Snapple Group quadrupled its debt load when it acquired Keurig Green Mountain Inc. in an $18.7 billion deal, taking its debt level to 5.6 times Ebitda. AT&T took on a whopping $190 billion of debt to finance purchases of Time Warner and DirecTV. Bayer purchased Monsanto for $63 billion, taking its debt levels far beyond the levels of a typical investment-grade company. In all, Bloomberg identified 50 instances where companies took on enough debt to normally push their bond ratings to junk status—and yet they have been allowed to remain investment grade.

The article includes the chart you see here, which shows that more than half of all investment grade corporate bonds are now in crowded into the lowest tier—teetering, if you will, on the edge of junk status. In the next recession, we could experience a higher-than-normal number of downgrades in corporate bonds, thanks to decades of low interest rates, ambitious corporate titans and credulous rating agencies.