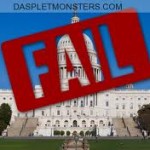 Raise your hand if you’re surprised that the Joint Select Committee on Deficit Reduction missed its November 23 deadline to craft a meaningful deficit reduction plan.  The 12-member panel, made up of six Republicans and six Democrats, basically took hard-line positions on partisan issues, including the pledge not to raise taxes, and never budged.  Two proposals by President Obama–one to cut $1 trillion in domestic spending and raise tax revenues by $1.2 trillion, another to cut $3.6 trillion from the deficit, with 60% coming from spending cuts–were rejected by the supercommittee in the course of its deliberations.

What now?  The original Congressional deal specified that there would be across-the-board government spending cuts adding up to $1 trillion, beginning in 2013.  That would eliminate $3.54 billion from the Federal Department of Education, including $134 million in student aid and $136 million in adult education.  Payroll taxes would jump from 4.2% this year to 6.2% in January, triggering some unrest among voters.  The Economist reports that overall, the U.S. military would have to cut up to $1 trillion–almost a fifth of the total–from its spending plans.  That would leave the U.S. with its smallest ground force since 1940, the fewest ships since 1915 and the smallest air force in its history.

These automatic cuts are described as “a pistol that Congress pointed at its own head in order to frighten itself into cutting the deficit.”  Nobody expected them to be enacted.  The members of the Supercommittee know that entitlements and pensions are the real drivers of the deficit, and that without additional revenues from somewhere, we won’t be able to pay down our nation’s current debt.  You would think a compromise could be forged out of that knowledge, and you might believe the committee members would prefer a compromise to the random axing that is now scheduled to take place.  For now, we can only watch and hope.

Are You Potentially Rich?
Investing Behaviors That Leave Money on the Table