Dividends: A Bird in the Hand 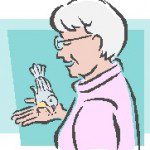 There’s a lot of focus on the dividend component of investment returns these days–for a variety of reasons. First, dividends represent money in hand, which is more of a sure thing than stock price appreciation. Many investors still have a wary eye on the 2008 meltdown, and they are having trouble convincing themselves that today’s record stock values represent real money in their portfolios. As the old saying goes, a bird in the hand is worth two in the bush.

On the other hand, there are taxes to consider. Since the passage of the new tax law last January, higher-income taxpayers (those in the 39.6% tax bracket) have to pay 20% on the money that is paid out by the corporations in our taxable accounts–up from 15% for tax years 2003 to 2012. The new Medicare tax will pile on an additional 3.8% tax burden for people with more than $200,000 (individuals) or $250,000 (joint) of taxable income. You can forestall the tax bite by putting dividend-paying stocks in your IRA, but in doing so, you eliminate another tax-saving measure: the ability to harvest capital losses whenever any of your stock holdings decline in value, share the pain with Uncle Sam and shelter some of your gains.

As recently as last year, dividend investing strategies were considered to be something of a fad, as mutual funds and ETFs that invested in stocks paying the highest dividend percentages were raking in record investor inflows. But naively investing in companies giving the most money back to their shareholders has not proven to be the ideal strategy. For one thing, because these rates are calculated as the dividend divided by the share price, the highest dividend payers are sometimes companies that have recently experienced the highest drop in share value. If a stock valued at $100 is paying a 4% dividend before it plummets to $67, the dividend is suddenly up to 6% of the share price–and becomes a screaming buy at a time when you might worry about the health of the company. Meanwhile, companies whose dividend rates look low may have recently experienced a surge in their stock value. Buying simply based on dividend rates may result in a portfolio that resembles a kennel.

In addition, some stocks, like utilities, act more like bonds than stocks; that is, they are built more for income than growth. Buying the highest dividend stocks could lead to lower overall growth in share value.

Finally, it should be remembered that the dividend rate is never guaranteed, and in fact is paid at the whim of the company’s board of directors. In 2012, after suffering through an earnings decline, the J.C. Penney company stopped paying its 4% dividend altogether. Looking in the other direction, late in 2012, anticipating higher taxes on dividends, more than 175 companies made the list of highest dividend payers when they sent “special dividends” out to their shareholders–which were to be paid out of future earnings this year.

When you sort out all the various issues, the best lesson is not to ignore dividends–they have, after all, provided 34% of the monthly total return on the S&P 500 since the beginning of 1927–but not to get carried away by them either. You’re probably being paid to hold the stocks you own regardless of your strategy. Just over 82% of the stocks in the S&P 500 are now paying some form of dividends to their shareholders, which is the highest rate since September of 1999.

Instead of looking for the highest dividend yields, a more workable strategy is to invest in funds or ETFs that invest in a broad portfolio of dividend paying (or value oriented) stocks that also have a track record of growing their dividends consistently over time, and which are only paying out a portion of their earnings in the form of dividends–what is called the “dividend cover ratio.” The historical average of earnings paid out as dividends is 52%, but that may go up in the months and years ahead. Companies are sitting on record amounts of cash–an estimated $1.1 trillion in the 500 stocks making up the S&P 500–and are still reporting record earnings. That money has to go somewhere, and some of it will eventually find its way into the pockets of patient investors.