Have you ever wondered how much money is lost in gambling activities in the U.S., or how that compares to other countries? Recently, The Economist magazine published a chart which adds up all the money that gamblers have lost using non-casino gaming machines, making bets in casinos, betting on sports or other activities, participating in lotteries, or betting with each other in card games, office pools and other activities. 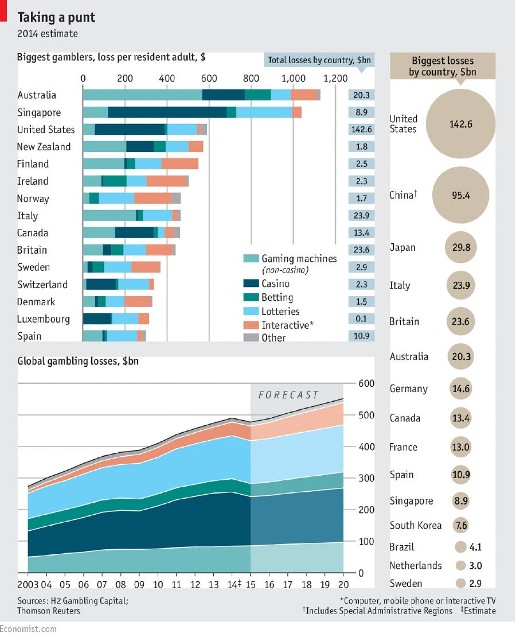 The total losses will reach an estimated $488 billion this year, by the magazine’s reckoning, of which $142.6 billion will come out of the pockets of Americans. This is by far the largest piece of the total, although China weighs in at a respectable $95.4 billion. Japan comes in a distant third, at $29.8 billion, followed by Italy ($23.9 billion), Britain ($23.6 billion) and Australia ($20.3 billion).

However, when the losses are measured per resident of each country, Australia and Singapore are easily the global leaders. Australian citizens rack up, on average, more than $1,130 in gambling losses a year, and the number tops $1,000 per resident in Singapore. In the U.S., the average is just under $600. Casinos rake in a big share of the money in Singapore and the U.S., but hardly factor into the losses in places like Finland, Ireland, Norway, Italy or Britain.