The financial experts know a lot more about the markets and how the markets will perform in the future than the ordinary rest of us. Right?

As it turns out, the predictions made by financial experts are no better than those made by gypsies looking into crystal balls, soothsayers gazing at the entrails of a sacrificed animal or wizards with tall caps who gaze into space. In fact, the financial experts might even be LESS reliable than those other charlatans.

The reason we don’t know this is that we all read the annual predictions made by so-called market experts, but nobody ever goes back to see if those predictions ever came true. Well, almost nobody. Larry Swedroe, an economist and director of research for Buckingham Strategic Wealth, spent much of 2017 compiling predictions that were made with a great deal of certainty, and recently gave what might be called a “guru scorecard” of results. 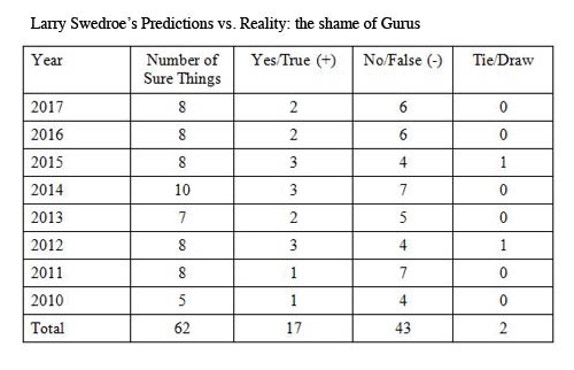 Another popular prediction: that the inflation rate would rise significantly—which also didn’t happen in 2017. Swedroe notes that economists expected stocks to provide moderate single-digit returns, the dollar to strengthen and emerging markets to get socked by the potential for trade wars. None of these predictions actually came to fruition.

In all, out of six “sure things” that the gurus predicted, just two actually happened: small cap stocks did indeed underperform large-cap stocks in 2017, and the U.S. economic growth did strengthen in 2017 over 2016—albeit modestly.

Swedroe has been keeping track of “sure things” that pundits have predicted, and whether they actually turned out to be true, since 2010. You can see from the chart that of 62 significant predictions in that time period, 43 turned out to be wrong.

If you’re looking for more evidence, consider this second chart, which shows the consensus of a lot of predictions of where 10-year bond rates will go each year since January 1, 2008. The chart is a bit complicated, but the dotted lines represent the consensus forecast from the U.S. Federal Reserve Board’s Quarterly Survey of Professional Forecasters. 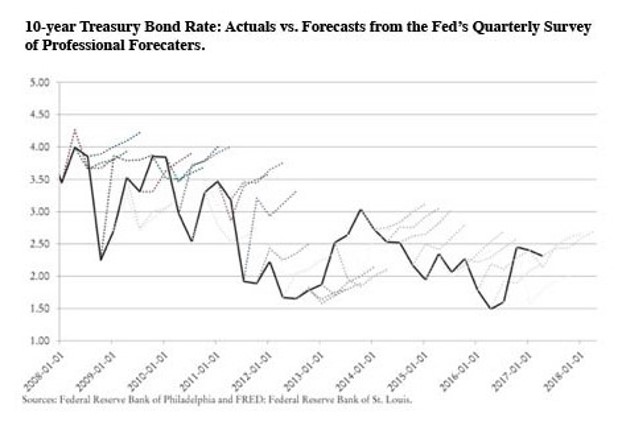 As you can see, at the beginning of each year since 2008, the forecasters have done essentially the same thing: predicted that bond rates would go up significantly during the course of the upcoming year. The darker line shows actual rates, which, with the exception of one year, actually fell significantly short of the predictions. (That year, 2013, the consensus was dramatically wrong on the downside—but still dramatically wrong).

All of this is worth remembering next time you hear a pundit or market guru make a confident prediction about what’s going to happen in the markets. Based on past history, you could have done better if you’d relied instead on a gypsy fortune teller.

Please Note: This article is used with permission from a newsletter to which KFG subscribes. It is for our

Professional or Sales Agent? You Decide.
Do You Need Long-Term Care Insurance?

One Response to False Visions of the Future