A new survey by the S&P organization—the S&P Global FinLit Survey—measured financial literacy across a wide spectrum of countries around the world. More than 150,000 randomly selected individuals in 140 countries were asked to answer five multiple-choice questions regarding investment diversification, the ability of income to stay on par with spending (or vice versa), interest payments and compounding investment returns. If individuals could correctly answer three out of the five questions, they were deemed to be financially literate.

So how did we do? Only 57% of the Americans surveyed were able to correctly answer three out of the five questions. But as you’ll see from the accompanying chart, that put the U.S. in the upper echelon of nations overall, ranking number 14 behind Finland (#10), Australia (#9), Germany (#8), the Netherlands (#7), the UK (#6), Canada (#5), Israel (#4) and the three top-scoring countries: Sweden, Denmark and Norway—all Scandinavian, which probably means they cheat by actually including financial literacy in their regulator educational curriculum. 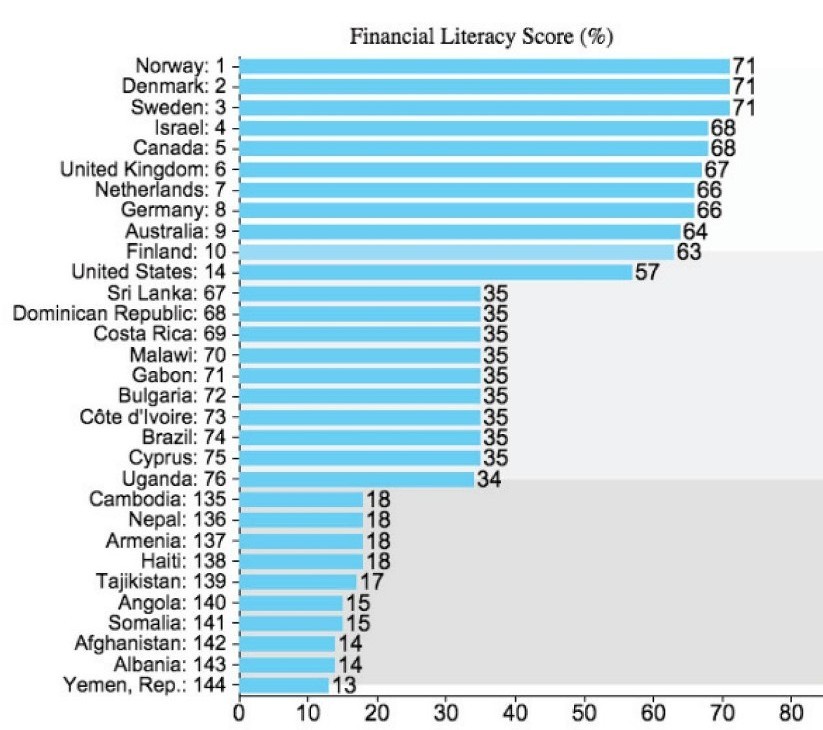 Not surprisingly, poorer countries tended to be less financially literate, and the survey found wide discrepancies between adults living in the richest 60% of households in each country vs. those in the poorest 40%. For instance, the U.S. saw a disparity of 64% literate (wealthiest households) vs. 47% (poorest). The conclusion: financial ignorance can carry an invisible lifetime cost.

Does that mean that U.S. policymakers will add a financial literacy curriculum to our nation’s high schools, as a way to increase the prosperity of our overall society? Let’s not hold our breath.

Client Meetings As You Need Them
Where the Action Is

One Response to Global Financial Literacy: The Haves and Have-Nots