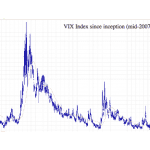 On Monday, Jan. 20, the U.S. markets dropped roughly 1% of their value, and Europe and Asia were down by similar amounts the following day. The market (the S&P 500) then fell 2.1% on Friday in a sickening lurch. This combination was enough to cause pundits and investors to ask whether we are now in the early stages of a bear market or, indeed, if the past almost-five years should be considered an interim market rally inside of a longer-term bear market.

The answer, of course, is that nobody knows–not the brainiac Fed economists, not the fund managers and certainly not the pundits. A Wall Street Journal article noted that most of the sellers on Friday were short-term investors who were involved in program trading, selling baskets of stocks to protect themselves from short-term losses. Roughly translated, that means that a bunch of professional traders panicked when they learned that Chinese economic growth is slowing down, on top of worries that the Fed is buying bonds at a somewhat less furious rate ($75 billion a month vs. $85 billion) than it was last year.

What we DO know is that it is often a mistake to sell into market downturns, which happen more frequently than most of us realize. A lot of people might be surprised to know that in the summer of 2011, the markets had pulled back by almost 20%–twice the traditional definition of a market correction–only to come roaring back and reward patient investors. There were corrections in the spring of 2010 (16%) and the spring of 2012 (10%), but almost nobody remembers these sizable bumps on the way to new market highs. Indeed, most of us look back fondly at the time since March of 2009 as one long largely-uninterrupted bull market.

Looking at the bigger picture, since 1945 the market has experienced 27 corrections of 10% or more, and 12 bear markets where U.S. equities lost at least 20% of their value. The average decline was 13.3% over the course of 71 trading days. Perhaps the only statistic that really matters is that after every one of these pullbacks, the markets returned to record new highs. The turnarounds were always an unexpected surprise to most investors.

We may get a full 10% correction or even a full bearish period out of these negative trading days, and we may not. But the history suggests an important lesson: if we DO get a correction or a bear market, we may not remember it a few years later if the markets recover as they always have in the past. The people who lose money in the long term are not those who endure a painful market downturn, but the people who panic and sell when the market turns down.