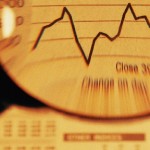 The stock market caught everybody off guard last Friday, August 3. The S&P 500 index climbed 1.90% on news that the U.S. economy created 163,000 new jobs in July—about 60% more than economists were expecting. But this was the fourth consecutive week of gains, and there is no clear explanation for those other positive trading weeks in the economic numbers.

Newspaper columnists and cable pundits have told us that investors were expecting the Federal Reserve Board to do something to stimulate the economy. But what, exactly, can the Fed do now that interest rates are at rock bottom? Buy more Treasury bonds when rates are already near the lowest in the world? Lend to banks at even cheaper rates than they do now?

Others have said that investors are feeling optimistic that the Eurozone debt crisis is easing. The good news there, oddly enough, came when Spanish prime minister Mariano Rajoy, on Thursday, hinted in a press conference that he might be willing to request a full-fledged bailout. He didn’t actually come out and make the request, but only said that he would “do whatever is in the best interest of the Spanish people.” This reassured investors who had been worried that the Spanish government would resist asking for help even as its two-year government bond rates topped 7%.

Looking deeper into Europe’s ongoing credit mess, The Economist magazine reports that the only real solution is economic growth. Then the magazine offered a remarkable statistic. Since 1975, the countries now using the Euro currency have given birth to exactly one company that currently ranks among the world’s 500 biggest: Spain’s Inditex. (By way of contrast, the U.S. state of California alone has created 26.) The magazine tells us that Europe is going to have to change the way it does business before we can expect to see an end to the present crisis.

So where did this (admittedly guarded) optimism come from? The interesting thing here is that inexplicable rises in the stock market are not uncommon, and many times they are one of the first indications of a yet-unseen recovery in the economy. Economists divide the numbers they watch into two categories: “leading” and “trailing” indicators. The leading indicators hint at the future; that is, they change before the economy as a whole changes. Trailing indicators confirm the trend.

The Conference Board lists ten leading indicators, and one of them happens to be the Standard & Poor’s stock index. It seems to work—although not perfectly—in predicting when the U.S. will fall into, or pull out, of a recession or experience better economic growth.

The trend shows the index in good and poor economic times; the gray shaded years represent U.S. recessions. Notice that the markets have tended to drop before the recession hits, and that they tend to start recovering before the U.S. has emerged from the gray zone. (The 2001 recession is an exception, but the market did start to recover before the end of the recession had been declared and confirmed.)

How does this work? The best explanation seems to be that our economy’s insiders—that is, corporate CEOs and top executives—are able to look at their own operations and notice improvements in sales, revenues, or efficiency that economists cannot yet measure. Astute investors who have a network of friends and other sources deep in the economic system will get the same information, and both groups will start quietly buying into the market at what they regard as bargain prices. The market will start to go up without any apparent reason to outsiders—until the recovery is finally confirmed by those trailing economic indicators, at which point everybody else crowds in and we experience a bull market.

Of course, it works the other way as well. Toward the end of the bull, those same insiders sense that the current prices are too high for what they see in their own operations. They start to lighten up their stock holdings, shifting more weight to the sell side of the ledger, and stock prices inexplicably start trending downward.

The point is that most of us never know why the markets suddenly become more optimistic, as they have over the past four weeks. This is something that economists freely admit. Instead, they watch and listen to what the investors are whispering through their trades. The other point is that what you normally hear on the cable financial programs is exactly the opposite of what you’ve just read. The next time you hear a well-dressed pundit telling you that the economy has done this, and therefore he expects stocks to do that, remember that the whole dynamic actually works the other way around.

A Smaller Piece of American Pie
Lying About Libor