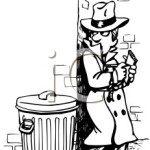 Psssst. Yes, I’m talking to you.  Step over into this cozy dark alley for a moment and take a look at this deal I have for you.

See?  Right here under my trench coat: municipal bonds that are yielding 10%, federal and state-tax exempt. Five times the yield of some government bonds whose interest is fully-taxable. Legal? Of course it’s legal. These bonds are issued by the self-governing American territory known as Puerto Rico.

Investors who fell for this pitch lost between 50% and 70% of their investments in the past five months, proving once again that high returns are pretty much always joined at the hip with high risk. But the Puerto Rican bond story is interesting for other reasons as well. The island territory has long been a favorite of professional muni bond investors because its securities have offered persistently high yields and because those yields are exempt not just from federal taxes, but from state taxes in all 50 states as well. To get that state tax exemption anywhere else, you have to invest in the qualifying municipal bonds issued in the state you pay taxes in.

Demand for these omni-tax-free bonds got so high that Puerto Rico became, in effect, a major exporter of municipal bond debt. Moody’s Investor Services estimates that the territory now has between $52 billion and $70 billion in outstanding paper, making it–astonishingly–the third-largest issuer behind the states of California and New York. But the most jaw-dropping statistic is its ratio of state debt to personal income–which is a pretty good measure of a municipality’s capacity to pay back its debt obligations. The average debt to income figure for all U.S. states is 3.4%. In Illinois, which is routinely cited as the state teetering closest to the edge of bankruptcy, that figure is just over 5%. For Puerto Rico, the comparable number is 89%.

What are the chances that Puerto Rican bondholders–including high-yield municipal bond funds–will get fully compensated for their investments? The territory’s 13% unemployment rate and 41% rate of participation in the labor force does not inspire optimism; nor does the fact that the territory’s pension fund is only 7% funded. But unlike a city (think: Detroit), Puerto Rico cannot declare bankruptcy. Nobody knows exactly what will happen if (or when) the island doesn’t have the money to make its next round of interest payments.

Even some prudent investors may feel the impact of a potential downgrade, restructuring or default. Because Puerto Rican bonds don’t trigger state taxes, some state-specific muni bond funds have quietly loaded up on them to boost their yields and look more competitive compared with their stodgier peers. Regulators are concerned that investors were not informed of this aggressive investment tactic, and had no idea that a chunk of their nest egg was being shipped down into the Caribbean equivalent of Greece.

One example is the $29 million Hancock Horizon Mississippi Tax-Free Income Fund, which quietly stashed 11% of its investors’ dollars in Puerto Rico bonds rather than state-issued local paper. The fund’s net assets have declined 35% this year. The Franklin Double Tax-Free Fund had 60% of its net assets invested in Puerto Rican debt, and is down 14%. Franklin’s $13 billion California Tax-Free Income Fund held about 5% of its assets in munis issued by Puerto Rico. It, too, has suffered losses.

Meanwhile, if you liked the pitch by that guy in a trench coat, step deeper into the alley and put your hard-earned dollars into the Van Eck Market Vectors Puerto Rico Municipal Index ETF, due to come out of registration later this year or early in 2014. The registration statement on this exciting investment opportunity describes it as a pure play on Puerto Rico’s debt, but with side investments in municipal bonds issued by Guam, the Virgin Islands, American Samoa and the Northern Marian Islands. Yields will be sky-high. Returns could be another story.