It’s not hard to imagine that the hotel industry has suffered during the pandemic, but many of us might have guessed that it would fully recover later this year, as the country finally gets vaccinated. Not so, says the American Hotel & Lodging Association. 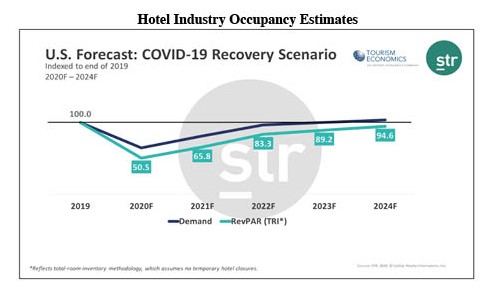 Its survey of business travelers found that 29% of them don’t expect their travel agendas to get back to normal until after 2021, and another 7% do not expect business travel to ever resume to pre-pandemic levels. Projections on hotel room occupancy indicate that room revenue on the industry’s 5.3 million guest rooms will not have recovered to 2019 levels until sometime in 2024. Today occupancy rates are running at 52%, on average, well below the 66% in normal times. In all, the hotel industry is currently offering nearly 500,000 fewer jobs than at pre-pandemic levels.

The AHLA also published a list of hotel jobs by state, which shows declines across the board due to COVID. But the interesting thing about the state-by-state statistics is that they tell us which states are tourist destinations and which have many fewer hotel employees. Florida, for instance, had 206,667 hotel jobs before the pandemic, which was below California’s 292,566. Nevada, which attracts tourists to its casinos, typically employs 191,479 people in its hotel sector.

At the other end of the spectrum, New Hampshire reported just 8,824 hotel employees, which was actually more than North Dakota (7,252), but fewer than Nebraska (8,824).