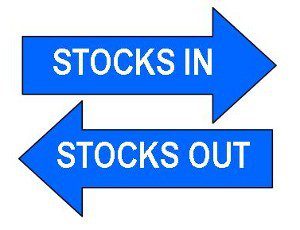 Most people think of the major stock indexes as a stand-in for a certain sector or category. The S&P 500 represents large companies, the Russell 2000 tells you what small capitalization stocks are doing, and the Dow represents broad economic sectors. You see tables showing the return of these indices over decades of time, and you might assume that they are made up of the same stocks during that time period, instead of trading in and out of stocks like a mutual fund.

But in fact, all of these indices are somewhat actively managed, in the sense that they move stocks in and out of the index on a regular basis. This became news when the Dow Jones Industrial Average decided to add the biggest company in the world—Apple—to its mix of 30 stocks, replacing AT&T. The Dow has changed slowly but regularly over time; of the 12 stocks in the index when it was announced in 1907, only General Electric remains on the list. Only four companies remain from the 1935 list: GE, DuPont, ExxonMobil and Procter & Gamble.

Sometimes these changes are dictated by the structure of the index itself. Microsoft and Apple were once small cap stocks appropriate for the Russell 2000. They have long since graduated out of small cap status.

How will substituting Apple for AT&T affect the Dow? Since the Dow is weighted according to the share price of each stock, we can expect movements in Apple stock to greatly affect how the Dow performs going forward. When Visa International undergoes its anticipated four-for-one stock split, Apple’s $100 shares will become the biggest component of the Dow, and a $10 drop or rise could lead to a 100-point movement in the overall index. A $33 stock like AT&T would have been far less likely to rise or fall by that dollar amount.

Bigger picture, when you look at the long-term performance of an index, remember that this is not achieved with the same mix of stocks throughout that history. The indices may “trade” more slowly than most mutual funds, but they’re turning over their portfolios over time as well.

What Is Your Financial Planner’s Core Purpose?
Return On College