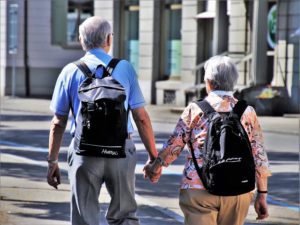 We’ve been hearing for years that the Social Security trust fund will run out of money in 2034, and a close reading of the Social Security Administration’s Trustee Report projections show what this would mean. By that time, based on estimates of the number of people earning an income in the workforce, the numbers of Social Security benefits recipients still alive, and the amount of income, overall, that the workers will be earning, payroll taxes will account for about 77% of the existing benefits—indexed for projected inflation.

In other words, if we don’t fix the system between now and then, by 2034 the government will be taking payroll taxes and turning around and paying this money back to the Social Security beneficiaries, and that money is projected to equal about 77% of today’s benefits. As more people retire and live longer, the ratio of workers to beneficiaries is expected to gradually decrease, meaning that 77% will become 76%, then 75% and gradually shift downward, barring an influx of new workers or unexpected mortality among the elderly.

Chances are, there will be a fix of some sort between now and 2034. But what will it look like? Two hundred Democratic co-sponsors in the U.S. House of Representatives have recently signed on to an expansion of Social Security that would keep the trust fund solvent—and the payments coming—for at least the next 75 years.

What are they proposing? The new bill, which is unlikely to pass Congress until/unless the Democrats take control of the Senate, would address one of the current anomalies of the payroll tax, that it stops at $132,900 of annual income. That means a person earning $132,900 pays 6.2% of her income, while a person earning $266,000 pays 3.1%, and a person earning over $1 million pays just .77% of total income in payroll taxes. The legislation would, just like today, stop collecting payroll taxes temporarily at $132,900 (adjusted each year for inflation), but resume those taxes on all income over $400,000. It would also gradually raise the 6.2% tax rate to 7.4% by 2042.

In return, all Social Security beneficiaries would receive a 2% increase in benefits, and the benefits would go up a bit faster each year, using the CPI-E index for inflation, rather than chained CPI. (Much of the difference is that the CPI-E calculation is more sensitive to medical inflation and other costs that disproportionately affect seniors.) Higher-income seniors would also get a bit of a tax cut; that is, less of their Social Security benefits would be taxed, using a complex change in an already-complex formula.

Not in this proposal, but worth considering, is allowing the Social Security trust fund to invest at least some of its assets in equities, which appreciate much faster in value than the current “assets:” promissory notes backed by Treasury bills. Look for a healthy debate on the solvency of Social Security in the next election cycle.