You’re probably tired of hearing about the Greek debt crisis, but sometimes it helps to connect the abstract with the concrete—that is, the huge numbers involved with the actual lives of the people living in the country.

The Greeks today live in a vacuum of uncertainty, with their banks closed at least another day, limited access to their funds, and the knowledge that the banks don’t actually have much of the money they’ve deposited there unless a somewhat uncaring European Central Bank decides to provide a backstop package of guarantees.

And they’re not alone. The chart, with statistics compiled by the Organization for Economic Cooperation, shows the percentage change in the “life satisfaction” of the average person in different countries since 2007—which roughly marks the beginning of the financial crisis around the world. 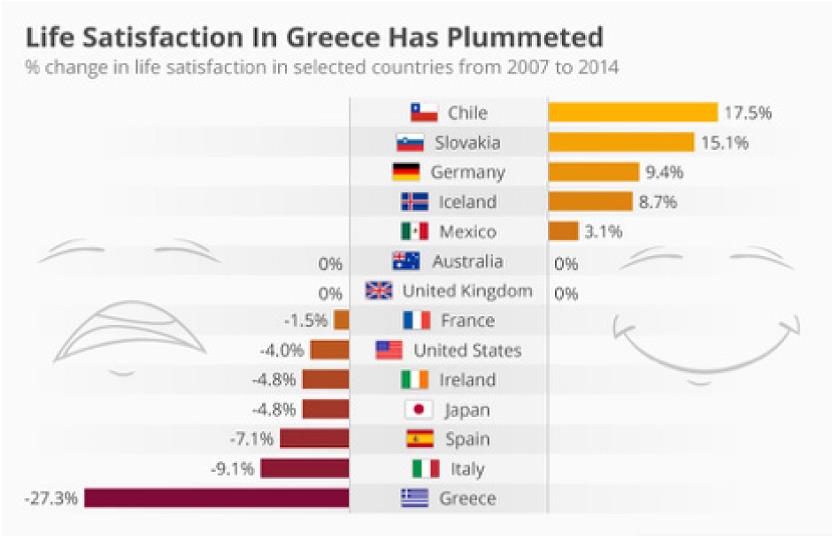 As you can see, there has been a small decline in the U.S., probably reflecting wage stagnation and a slow recovery in jobs and economic activity. But look at the bottom and you see that the Greeks have experienced a 27.3 percent decline in their life satisfaction. According to the report, only 47.8% of Greek citizens agree with the statement: “I generally feel that what I do in life is worthwhile.” In Denmark and the Netherlands, 91.4% agree with that statement.

Other countries that are experiencing a debt crisis and high unemployment—Italy, Spain and Ireland—have gone through lesser (but still significant) declines. Meanwhile, at the other end, the German people, who hold all the cards in the various debt crises, have been experiencing a mild euphoria, matched only by Slovakia and Chile, which have been among the fastest-growing economies over the past seven years.

Overall, there was a strong correlation between the growth of GDP per capita and perceived life satisfaction among the countries studied—with a few exceptions. The people of Denmark and the Netherlands seem to have been consistently satisfied with their lives before, during and after the crisis. The people of Poland and Turkey seem to be unmoved by the rapid economic growth their countries have experienced recently. And the U.S. and Canada, which are better off than most of the world economically, have experienced a decline in their general life satisfaction. Maybe we should realize how lucky we are in our situation compared to that of the Greeks.

The Brink of Grexit
Uncle Sam Not Stealing Your Social Security