For years, the U.S. life expectancy was among the longest in the world, a natural byproduct of the fact that the U.S. is wealthier, per capita, than other nations. Indeed, a research report in the medical journal The Lancet projects that between now and 2030, women in the U.S. will live an average 83.3 years (up from 81.2 today) and men an average of 79.5 years (up from 76.5 today). 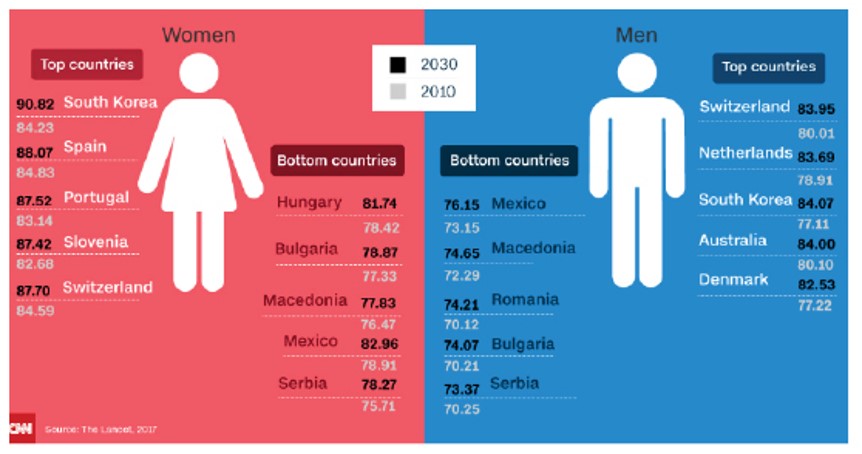 The report analyzed data on mortality and longevity patterns from 35 industrialized nations, both high-income and emerging. American longevity increases are surely encouraging, but the more interesting part of the study is how the rest of the world is catching up and even surpassing American seniors. South Korean women are projected to live to an average age of 90 years in 2030, and women in Spain, Portugal, Slovenia and Switzerland will see average lifespans above 87. South Korea, the Netherlands, Australia, Denmark and Switzerland will all see their male citizens survive, on average, beyond age 80. Gains in Mexico and the Czech Republic will put lifespans there, for both men and women, at levels comparable to the U.S. by 2030.

Why is the U.S. not progressing as fast as other countries? The report and some of the research around it note that the U.S. has high obesity rates and our diets are not as healthy, per capita, as some of the leading nations. South Korea has invested in childhood nutrition and medical technology, and although the U.S. spends more of its total GDP on healthcare than any other nation, the quality of health tends to be top-heavy; the richer Americans can afford much better care than their less-wealthy counterparts.

106 Things We Do For Clients, No. 15
Here’s How Talking About Money Can Improve Your Bottom Line