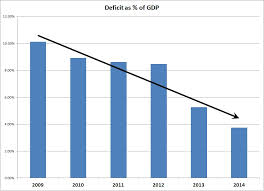 America’s budget deficit is ballooning out of control, right?

As it happens, while Congress and many Americans feel we need to cut government spending, analysts are discovering something surprising: the U.S. government budget deficit this year and next appears to be shrinking.  The Wall street firm Goldman Sachs has issued a report which lowered fiscal 2013’s estimated red ink from $900 billion to $775 billion, or about 4.8% of total U.S. economic output.

How did this happen?  Spending is down as a result of the sequestration ($85 billion this year) plus tax revenues are up 12% over last year, the report tells us.  I don’t doubt that much of that revenue increase came from investors dumping money out of C-corps in the form of dividends, doing ROTH conversions, and accelerating sales of real property. Still, the higher tax revenue says that the deficit may come in even smaller than currently anticipated, due to the higher payroll taxes that are only now starting to be counted on the government’s balance sheet.  If the economy grows faster than expected, that, too, could bring in higher-than-anticipated revenues.  Goldman now projects the budget deficit to fall to just 2.7% of economic output by the 2015 fiscal year, which many economists believe is a sustainable level.

Interestingly, some global economists are not happy about this optimistic budget news.  Senior members of the International Monetary Fund are criticizing Washington policymakers for imposing too much budget austerity, too soon, arguing that it is preventing the unemployment rate from coming down more quickly. 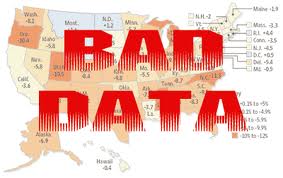 Meanwhile, one of the most influential arguments for bringing the overall deficit down before it reaches 90% of American GDP has taken a serious hit to its credibility.  In an astonishing development, three professors from the University of Massachusetts have looked over spreadsheet data behind a highly influential book published by professors Carmen Reinhart and Ken Rogoff, which purports to show that throughout history, nations have typically foundered when their debt level reached certain thresholds.  The UMass professors found that in their calculations, Reinhart and Rogoff inadvertently omitted data for three countries: Australia (1946-1950), New Zealand (1946-1949) and Canada (1946-1950).  An embarrassing coding error in the spreadsheet also excluded other data from five countries: Australia, Austria, Belgium, Canada and Denmark.

When the missing information was correctly included, it painted a very different picture of the dangers of high government debt levels.  In the original report, whenever countries reached overall government levels of 90%, they experienced negative GDP growth–essentially, a recession–in aggregate over the countries studied.  With the new data, countries crossing that threshold, in aggregate, actually experienced 2.2% positive growth levels.

This revisionist view is actually being confirmed in the real world.  Japan has the highest debt-to-GDP ratio in the world, well beyond the supposed collapse threshold, and its interest rates have remained stubbornly low (as, to be fair, has its economic growth).  Southern European countries that have embraced austerity–like Greece, Spain and Portugal–have endured multiple recessions, the opposite of what the original (flawed) Reinhart/Rogoff data suggested.  Surprisingly, the United States, which opted for a stimulus approach to the 2008 meltdown, is recovering faster than any developed country in the world.

It’s unfortunate and frightening when we build economic concepts on mistruths, error, and inconsistencies. There really isn’t anything new here.  The old axiom of “garbage in, garbage out” still holds true.

Which Financial Advisors Are Transforming Their Profession?
The Art of Getting Value