During times of economic crisis—like today—we read that the Federal Reserve Board has “cut interest rates,” or “lowered the Fed funds rate.” But what does that actually mean to you and me? 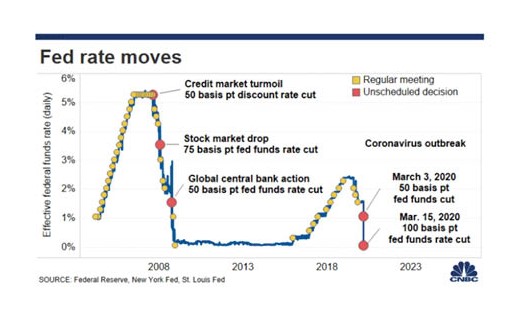 The chart tells an interesting story. It shows the Fed funds rate—the rate that the Fed charges banks when they take out virtually unlimited short-term loans from the Fed or each other—rising steadily from around 2004 to late 2008. After the brokerage industry suddenly took the global economy to the edge of bankruptcy, you see the Fed dramatically lowering its discount rates to the banking industry, down to essentially zero for the next eight years. Then there was a very cautious period when the Fed governors started raising rates, until the COVID-19 virus started tanking the markets. Now we’re back to zero again.

So the first thing to know is that the banking industry—particularly the banks affiliated with the largest wirehouse firms—can borrow as much money as it wants without paying any interest. Try to get the same deal from your local bank.

This low discount rate has a number of real-world consequences. One is that the brokerage and banking firms can lend money, at a profit (basically anything above zero percent) to companies that need to borrow. Theoretically, that will boost the economy. However, both in 2008-9 and now, banks were leery about lending to businesses in an uncertain economy. They can still lose money, after all, if the borrower goes bankrupt and defaults on the loan.

For consumers, there are small impacts. One is that credit card rates are down from a high of 17.85% last July, when the Fed started cutting rates, to a three year low of 16.46% today. If you think that’s a very incremental decrease compared with the magnitude of the Fed moves, you’re right. And the economic impact is diminished further, since banks are making credit cards much harder to obtain in this uncertain environment.

Finally, mortgage rates are slightly lower today than they were a year ago; Bankrate says that the average 30-year fixed rate is down to 3.55%. Yet again, however, banks have stopped offering many of their refinancing options due to the shaky economy, making it hard for homeowners to obtain this rate.

There must be a great deal of frustration in the Federal Reserve building these days, at the ineffectiveness of their bold moves to get the economy moving again. Over and over again, their actions are blunted by the self-interested actions of the big banks and brokerage firms—and there’s no sign that that is going to change any time soon.