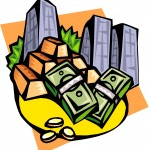 You may have been scratching your head at the ongoing (so-called) “Libor Scandal.” What, exactly, did those banks do that was so awful? One answer is: they lowered your interest rates on everything from credit card debt to student loans.

“Libor” is an acronym that stands for “London Interbank Offered Rate,” which is calculated each day by the British Banker’s Association in London. Every morning, representatives of the BBA ask large banks to estimate the rate at which they believe other banks would lend them money over various time periods—ranging from overnight to 12 months. The BBA collects all the estimates, throws out the highest and lowest figures, averages the remaining numbers and publishes the result every day at 11:30 AM London time—denominated in ten currencies, including the U.S. dollar.

Libor is then used by lenders around the world to reset their rates for a variety of variable-rate loans. When their teaser rates run out, many U.S. adjustable-rate mortgages (ARMs) are priced at somewhere between 1.5% to 3% over the one-year Libor rate. Some of the credit cards in your wallet or purse charge, on all unpaid balances, 20% (or more) above whatever the Libor figure happens to be. Commercial and student loans are routinely set and adjusted based on Libor figures.

Rigging this important interest rate benchmark was shockingly easy. The scandal, which has already caused Barclays PLC CEO Robert Diamond, Jr. to resign in disgrace, came about when regulators discovered that bank executives made a habit of lying about these numbers to the BBA representatives—and even discussed their phony numbers with executives at rival banks in email messages. As a result, since 2008, large and sometimes questionably-solvent banks have been estimating that they are far more creditworthy than they knew they actually were. By submitting low estimates of their borrowing costs, they artificially and systematically drove down the published Libor rate.

A total of 17 large financial institutions, including five companies with significant brokerage and sales operations in the U.S. (UBS, Citigroup, Credit Suisse, Bank of America and JP Morgan), plus Barclays Bank and Germany’s Deutsche Bank, are under investigation by regulators in the U.S. and Europe. Barclays has already paid $340 million in fines.

As it turns out, even a cursory check of the rates that banks were actually borrowing on the credit swap market would have turned up the discrepancies. After the scandal broke, Fortune magazine pulled up these figures, and reported that Citigroup might have been the most persistent offender in the group. The magazine compared each bank’s Libor submissions with other measures of their borrowing costs, looking for the biggest gaps (and, therefore, the biggest lies). Citibank’s differential consistently led the pack.

Rigging Libor gave brokerage traders a crafty advantage over their customers. At Barclays, traders made big bets on derivatives whose value depended on Libor; knowing how those rates would incrementally shift up or down was remarkably lucrative—at the expense, of course, of investors who didn’t have this advantage.

What are the implications of all this for the average Joe on the street? If your mortgage happens to be an adjustable-rate loan tied to the Libor index, brace yourself. Your rates may have been artificially low since 2008, and could jump as the BBA starts to get more realistic estimates. The aforementioned student loans and interest on credit cards could also bump up a bit.

Beyond that, you can thank the deceptive brokerage firms and banks for lowering interest rates and saving you a few dollars, even if you know that you were the last thing on their minds when they whispered deflated estimates into the phone.

But perhaps the biggest takeaway is that we have once again discovered that some of our largest financial institutions have gotten in the comfortable habit of lying. Indeed, in an op-ed piece in London’s daily The Telegraph, an insider from one of Britain’s biggest lenders, speaking for his colleagues around the world, said that this manipulation and deception—telling quasi-regulatory bodies that the bank could borrow at 2% when in reality the right number was more like 5-6%—was a routine part of doing business.

Not only was the deception an open secret, the large banks themselves, he said, would refuse to lend to their customers based on the phony Libor rates they were providing. Why? Because they knew the numbers were phony.