The recent sharp drop in the markets has brought some attention to the inversion of the so-called yield curve, where short-term government bond returns are higher than long-term ones. Such an inversion has in the past been a good predictor of recessions. In March of this year, the two-year Treasury yield briefly touched above the yield on 10-year Treasuries, triggering headlines across the financial marketplace. 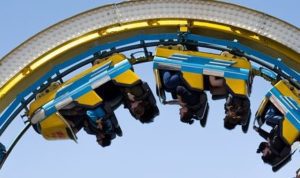 Inverted yield curves are not ideal for economic growth. They can discourage banks from longer-term lending, and they discourage investors from committing their capital to lending longer-term. (Why accept lower rates on riskier long-term investments when you can get a higher rate on a less-risky short-term one?) And this current yield curve inversion may be telling us what we already know: that a recession is coming, sooner or later. In the past, the U.S. economy has experienced a recession around one in every five years; the current 9-year economic expansion is already overdue to end.

The one entity that can put back some steepness in the yield curve is the Federal Reserve Board, which has expressed concern about the situation already, and which acted by cutting the Fed Funds Rate by 0.25%. That action, and at least one other rate cut expected this year, would bring down the yield of short-term bonds and end the inversion. It would also encourage corporations to borrow to finance long-term projects, giving the economy a bit of a boost—and (though this is not guaranteed) reduce the depth of the inevitable next recession.

Adding Value To Your Home—Or Not
When Parents Can’t Say No: Financial Enabling