Here’s a quick factoid quiz: which country around the world has the most millionaires? How many total millionaires are there in the world today?

According to the 6th annual Credit Suisse Global Wealth Index, measured in dollar terms, there are 33.7 million households worldwide with $1 million or more in total net worth—a 146% rise since 2000. More than 46% of these favored households are located in the United States—15.7 million millionaire households overall. The United Kingdom and Japan are far behind on the list, with 7% (2.3 million households) and 6.3% (2.1 million) shares of millionaire households respectively. They are closely followed by France and Germany (5%; 1.5 million) and China (4%; 1.3 million). 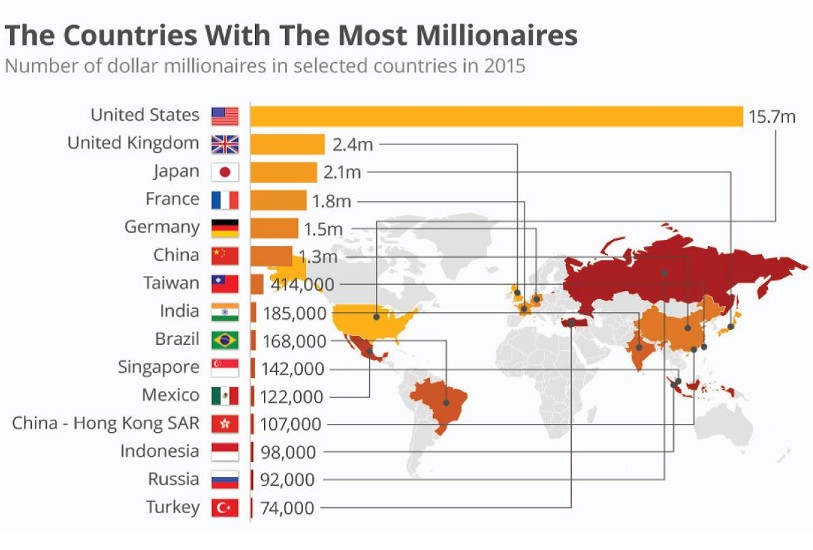 The trends are positive for the U.S., which saw 900,000 new households reach the millionaire club in the past year, and China, which added 150,000. Japan, meanwhile, had 680,000 households fall out of millionaire status, and Europe overall lost the most members of the club, shedding 2 million, primarily from France, Germany, Italy and Sweden.

Which countries are left out of the millionaire club? All of Africa and India combined make up just 1.3% of the total millionaire households.

Perhaps the most interesting insight from the survey is the fact that having a million dollars in assets is no longer an exclusive club. And it’s becoming less so. Credit Suisse estimates that the number of millionaires will grow more than 35% over the next ten years.

Before You File Your Income Tax Return
What Do We Do All Day?