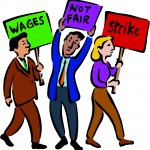 If you look hard enough, you can find a lot of silliness in the Occupy Wall Street movement. This is unfortunate because, somewhere behind the tents and weird finger communications and alleged drug use, there’s a real story to be told. And the story seems to be bigger than the media can get its arms around.

For example? Financial insiders and those of us in the financial planning profession have watched the brokerage industry fight furiously–and successfully–against having to register their brokers with the Securities and Exchange Commission as registered investment advisors. Why? Because that would require the registered brokers to give advice that puts the interests of their customers ahead of their own and also (quel horreur!) ahead of the companies that employ them.

Perhaps more to the point, those of us in the financial profession have to live with the fact that the major Wall Street firms are rarely held accountable for crimes and other actions that would be severely punished if you or I committed them.

Such as? Consider the recent settlement of an enforcement case that goes back to the 2008 market meltdown. The Wall Street Journal reported that U.S. District Court Judge Jed S. Rakoff is questioning how diligently the U.S. Securities and Exchange Commission enforced securities law when it investigated Citigroup (parent company of brokerage giant Smith Barney) regarding its sale of some of those infamous toxic mortgage-based debt instruments. Smith Barney brokers were selling the subprime mortgage instruments to their customers as highly-rated, safe bond instruments at the same time that the company’s traders were betting heavily that the same packaged bonds would spiral down the toilet. In internal e-mails, one chortling trader described betting against the investments the company was selling, at a commission, to its customers as “The best short ever!!”

This once-in-a-lifetime short bet, combined with selling the dog investments in the first place, resulted in what the SEC estimated to be $160 million in fees and trading profits to Citigroup’s bottom line.

The SEC’s proposed fine, questioned by the judge: $95 million.

It gets worse. In the SEC’s boilerplate language when it settled with major Wall Street firms, Citigroup and Smith Barney were allowed to neither admit nor deny the charges that they would be paying fines to settle. Judge Rakoff questioned whether there wasn’t “an overriding public interest in determining whether the SEC’s charges are true.”  Indeed.

Our regulators’ very careful, very gentle admonishment of Wall Street’s nastiest crimes has become such a routine part of our professional landscape that most of us in the financial services business have lost sight of how outrageous it really is. To put this in perspective, suppose you decided to go out and steal a neighbor’s flat-screen TV set. If you were caught, would the justice system require you to pay back a portion of the cost of it, never have to admit guilt, and promise to watch yourself more carefully in the future?

Might people in all walks of life behave differently if they knew that the routine consequences of their crimes would be so lenient?

While the financial press is reporting on Wall Street crimes gone unpunished, the consumer press is groping to figure out how the rise of enormous, greedy financial gatekeepers is impacting the American economy as a whole. No doubt you’ve read accounts of how the large investment banks took hundreds of billions of dollars in taxpayer bailout money and then refused to lend money back into the American economy as it was teetering on the brink. But Time magazine recently took a deeper look, in a cover article that concludes that America is no longer the world’s leader in upward mobility–the land of opportunity–that it once was.

The magazine rightly calls America the “original meritocracy,” where people were never supposed to be prisoners of the circumstances of their birth. Hard work defined the destiny of Americans. Those who were diligent were able to move out of poverty.

But then the magazine cites research by the Pew Charitable Trust’s Economic Mobility Project, the Brookings Institute, and the Organisation for Economic Co-operation and Development, all of which found that today it is harder for a person in America to move up out of his or her current economic status than it is in (I hope you’re sitting down) Europe. Today, 42% of American men with fathers in the bottom fifth of the earning curve remain there–and you know that at least SOME of them were hard workers. Only a quarter of comparable men in Denmark and Sweden fail to move up, and only 30% of men in Great Britain do. France and Germany ranked higher on the opportunity scale than today’s America. Sweden and Finland ranked much higher.

How did this happen?  The magazine found that the financial sector in America now takes up about 8% of the American economy–an historic high–and this has been correlated with a stall in American entrepreneurship. Meanwhile, the people who run America’s companies today earn more than 400 times as much as their lowest-paid worker, while the comparable number in Europe is around 40. Oddly, perhaps coincidentally, Europe’s gap between CEO and lowest paid worker is almost exactly where it was in this country when America was still being called the Land of Opportunity.

To round out the Occupy Wall Street picture, some researchers are actually starting to question whether the economy needs the banking sector, and what for. In what may be the most accessible report on this wonkish debate, London School of Economics professor Wouter den Haan notes that when the U.S. economy was emerging as the world’s leader, in the decades after World War II, the large investment banks generated about 1.5% of the total profits in the economy. Today, that figure is around 15%–ten times as much.

When the profits were at 1.5%, bankers circulated money efficiently around the business landscape in the form of loans that were carefully researched. That, clearly, provided an enormous net value to society. But the professor wonders whether it is equally valuable when those firms began to extract “huge fees from the rest of the economy to construct opaque securities that were so complex that only a few understood how risky they were.” If the prices had accurately reflected the true value of the products, he says, then those fees would have been negative, “since many such products were not beneficial to the buyer or to society as a whole.”

The article doesn’t consider the economic value that is created for society when a brokerage firm makes its profits betting against the toxic securities it created and sold to its customers.

Very little of these various issues are understood specifically by the people who are squabbling with police over whether they can pitch their tents in parks near the largest financial offices. The Occupy Wall Street crowd is acting on nothing more than a strong instinct that something is terribly wrong in America, and that the large banks are somehow at the center of the problem. The press can only seem to get its arms around little individual pieces of a very big picture.

But that picture, if we can see it clearly, is troubling. The American Dream is at stake. So, too, is the fairness of our legal system. What Wall Street fears more than anything else is a debate that asks whether much of what goes on in the largest investment banks–perhaps as much as 90% of it, based on current statistics–is doing our country and our economy more harm than good. Even more, it fears the idea that its hired representatives should have to give advice that primarily benefits their customers–which would immediately put an end to both the lucrative sales of creative new toxic securities and the revenue streams that would come from betting against them.

If we can start that debate in earnest, maybe the tents can come down.  Or, at least, the people living in them could tell the reporters who cover them exactly what it is they’re protesting.

2 Responses to Occupy the Big Picture