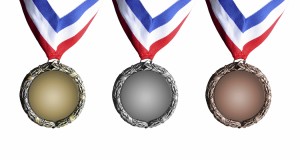 Does that mean that we Americans–so often accused of being a nation of couch potatoes–are the most athletic people in the world?  Total medal count is one way to measure, but it may not be the best.  Another measurement would take into account the relative number of medals compared to a country’s total population: Olympic medals per capita, or (to avoid many decimal places) the number of medals each nation took home per million people in its population.

Medals per million gives us a very different ranking.  By this measure, citizens of the Caribbean island of Granada are by far the most athletic, with 9.5 Olympic medals per million citizens, followed by the Jamaicans (4.4 per million), the citizens of Trinidad and Tobago (3.0), New Zealanders (2.9) and Bahamians (2.8).  The Cubans rank number 16, bolstering the hypothesis that the Caribbean islands, taken together, have the world’s most athletic populations.

However, this medals per million ranking is a bit misleading.  A country with a very low population has a huge advantage in this sort of list if it can manage to get one or two athletes on the podium.  With a total of 105,000 citizens (roughly the same as Billings, Montana or Round Rock, Texas), Granada needed to earn just one medal to claim the top spot on the list: Kirani James’s gold medal in the men’s 400 meter dash.  Montenegro, which has just 620,029 citizens (about as many as Seattle, Washington) finished eighth in medals per million purely on the strength of its silver medalist women’s team handball squad.

If the United States (population 314 million) had somehow managed to win all 934 medals given out at these Olympic Games, it would have brought home 2.974 medals per million citizens, which would have ranked no higher than 5th on this table.  If China (population 1.35 billion) had swept the medal count, the best it could have done was .693 medals per million people, fewer on this list than Slovakia (4 medals, including one silver by women’s trap shooter Zuzana Stefecekova), but comfortably ahead of Gabon (one silver medal carried home by heavyweight Taekwondo competitor Anthony Obame).

In this paired-down ranking, you find that some nations at the top are specialists in one or two events. Jamaica leads the way with its dominant performance by the insanely fast Usain Bolt and a host other speedsters who dominated the men’s and women’s sprint competitions.  Trinidad and Tobago, which won four medals in the sprints, finished second in this ranking.  New Zealand, third on the list, was also somewhat of a specialist; its competitors won two sailing medals and a Canoe/Kayak gold, plus three cycling medals and a silver in the women’s shot put.  Mongolia’s Olympic team was mainly good at fighting; its athletes took home two boxing medals, medaled twice in judo and took home a bronze in women’s wrestling.

Overall medal champ United States lands 35th on this revised list, with a per capita medal count roughly one-thirteenth of Jamaica’s.  By this count, America finished a notch ahead of Japan, but appears to be less athletic, per person, than Spain, Russia, France, Germany, South Korea and host Great Britain, which finished a very respectable 16th in medals per capita.  China, the runnerup in the overall medal count, came in 49th.

Is there something in this sporting calculation for economists to pore over?  When you turn to the bottom of the list, you notice some interesting trends.  When measured on a per capita medal basis, India finished dead last among nations that won at least one medal; overall, the world’s second-most-populous nation (1.2 billion people) brought home just six medals (including silvers in men’s freestyle wrestling and the men’s rapid-fire pistol competition).  That comes to 0.005 medals per million people.  Not far ahead was the world’s fourth most populous nation, Indonesia (238 million), which brought home just two medals (a silver and a bronze in men’s weightlifting), giving it 0.008 medals per million citizens.  One could argue, however, that several of the world’s 20 most populous countries should receive lower rankings.  Pakistan (180 million), Nigeria (167 million), Bangladesh (153 million), the Philippines (92 million), Vietnam (88 million) and Egypt (82 million) all failed to bring home a single medal from the London competition.

A closer look suggests a reason why.  Training for the Olympic trap shooting competition, or the kayaking finals, or sprints, hurdles or the 400 meter freestyle swimming events is fundamentally a leisure activity, which requires a lot of free time, elaborate training facilities, and perhaps also the promise of endorsement deals for those who stand on the Olympic podium.   Countries that rank near the bottom of the global rankings in per capita income (using statistics contained in the CIA World Factbook) tended to perform far less well, per capital, than their more prosperous peers.  Like Liberia (tied with the Democratic Republic of the Congo for the bottom ranking at #194), they were less likely to have citizens who can afford to spend years in a weight room or take a decade off work to fully master Greco-Roman wrestling moves.

China, at number 95, sits at roughly the midpoint of these prosperity rankings, and the bottom third can be defined as anything below 130th.  Of the 115 nations that earned no medal at all, 68 fall in this lower 33% range of global prosperity, and all but a handful are deep in the bottom half.

Meanwhile, among the 47 nations that earned more medals, per-capita, than the U.S., only seven (Mongolia at 130, Georgia at 119, Armenia at 118, Moldova at 136 and the Ukraine at 108) report below-global-average per capita income.  A few others, like Jamaica (94) and Cuba (89) are on the bubble.  It’s possible that these are truly, all things considered, the most athletic nations in the world.

Selling Real Estate In a Down Market
Client Wine-Tasting Event