Pundits like to point out that the current price/earnings (PE) ratio of the U.S. stock market is higher than historical averages, and well above their global counterparts. It’s true that stocks cost more, relative to earnings, today than at times in the past. But the real question is: is there cause for alarm?

The accompanying graph shows one measure of the S&P 500’s PE over the last 90 years. It tracks the trailing 12-month PE, defined as the aggregate share price divided by the aggregate one-year earnings over the past year. Some believe this measure is superior to PEs that use the forecasted earnings, because, well, we can’t be sure the forecasts will turn out to be accurate. Trailing PEs have the huge advantage of being relatively indisputable. 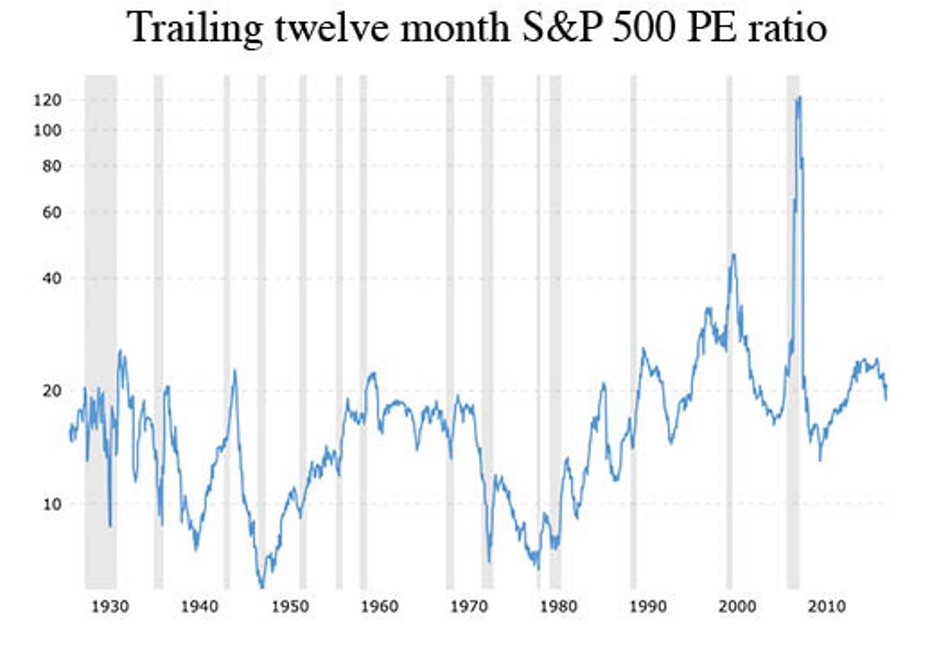 What do you see? The runup to the dramatic 2008-2009 market downturn really stands out. It is clear in hindsight what was not always clear at the time: stock prices had gotten somewhat over their skis. Meanwhile, if you look all the way back to 1929, you can see that today’s valuations—as has been famously repeated—are almost exactly what they were before the great stock market crash that led to the Great Depression.

But you might also notice that prices have been higher than that many times since, sometimes for sustained periods (see: 1990s). And while the market has gone up dramatically since 2009, PEs haven’t risen nearly so high.

Nothing about this graph tells us that stocks are cheap in today’s market. But you can see that some of the scary messages in the press might be somewhat overblown. The chart doesn’t show anything like the unsustainable price runup to 2008, or for that matter the runup to the 2000-2001 market drop. The tea leaves don’t really seem to be telling us much of anything, when you look at the valuations over a long enough time frame. That’s not quite as dramatic as saying that the valuations are as high as they were in 1929, but it’s a truer picture of what’s really happening as the indices ascend to new record prices.