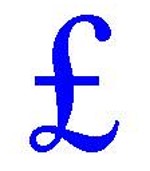 You may have read that the British pound has had a very rough couple of weeks on world markets, losing more than 4% of its value against the dollar in one week, and continuing the slide through the next, finally reaching a 31-year low against the dollar. Part of the problem was a mysterious “flash crash” that sent the pound down more than six percent before it briefly stabilized—and then promptly started the next week by testing those crash lows all over again. Market analysts blamed the initial decline on trading algorithms—that is, computers programmed to buy or sell in milliseconds based on news or shifts in the marketplace. Apparently, the twitchy programs triggered other algorithms to create a cascade of sell orders that had to be interrupted by human intervention. But now the human traders appear to be in agreement with the original panicked consensus.

The obvious cause for this decline in one of the world’s most historically stable currencies is uncertainty. U.K. Prime Minister Theresa May has signaled that her country will pursue a so-called “hard Brexit,” meaning a full uncoupling of British and mainland European trade agreements sooner and more definitively than the markets apparently expected. Brexit Secretary David Davis probably didn’t help matters when he said that Britain would renounce any contribution to the European Union budget, agree to jurisdiction of trade disputes in the European Court of Justice, or (a big issue for British voters) the free movement of labor across national borders.

Of course, French President Francois Hollande, responding to his counterpart’s rhetoric, promised that the European response would be equally harsh, and German Chancellor Angela Merkel added that negotiations would not be easy on her side of the table.

Right now, the British currency seems to be a way for all of us to visibly watch how market participants view the future of Britain’s economy, based on what they’re hearing about the way negotiators plan to handle the disengagement.

This is a classic case of foolishly trading on headlines rather than fundamentals, since the actual negotiations will last two years, and won’t even start until late spring of next year. Whatever the outcome of those negotiations, you can bet there will be a lot more news about movements in the British pound between now and two and a half years hence—up and down.

Meanwhile, with the pound this cheap, British-based exporters are expected to prosper, since whatever they sell abroad will now enjoy a price advantage. And this might be a great time for American tourists, if they can endure the autumn weather, to visit London, Stonehenge and Scotland—at bargain prices.