With the benefit of hindsight, we can see that it would have been a bad idea to sell your stock holdings after the Brexit vote; you would have locked in a 5% to 10% loss in a market that eventually trended upward to new record highs. The same is true of the aftermath of the World Court decision that slapped China in the face by declaring that man-made islands don’t transform an ocean into territorial waters, the attempted coup in Turkey, or, really, any other alarming headline which doesn’t materially affect a company’s ability to run its operations.

But the bigger issue is that, even if you think you know how the markets are going to react to a particular event, you still can’t time the market. How will you know when the quick-twitch traders will settle down and it’s time to reinvest? After the Brexit vote, it took a weekend for investors to realize that this was Britain’s problem, not theirs. It could have taken a month.

The same is true for the time period that we’re heading into now. As you can see from the accompanying chart, the average return for various months of the year has been pretty much the same across the spectrum. But August, September and October have seen bigger highs and (most alarmingly) also deeper lows, on average, than other months. This additional volatility seems to be random, and is, once again, impossible to time. People who decide to sidestep the late summer and early fall would miss out on average yearly gains for September and October of 1.05% and 1.21%. (Skipping August would have saved you modest losses of less than 1%, on average, but one suspects that this is a statistical anomaly.) 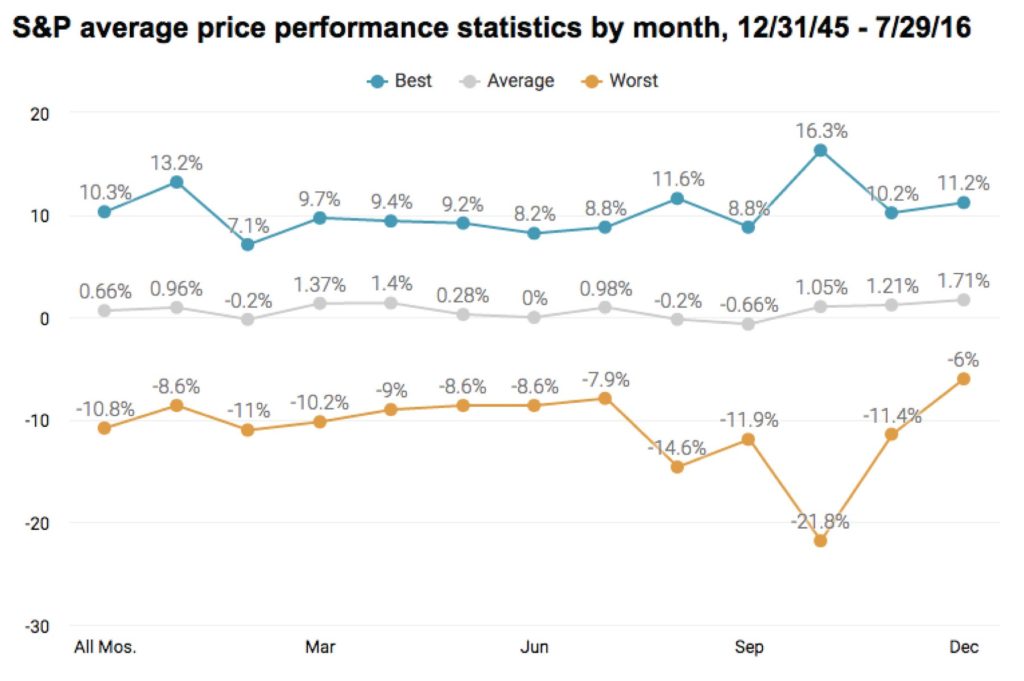 Doesn’t that mean it’s time to take our chips off the table? If we knew how to time the market, if we could be sure that the market run won’t continue for another few years, then the answer would be yes. But with the economy continuing to churn out positive GDP, with inflation low and unemployment continuing to fall, it’s hard to see what would cause U.S. stocks to be less valuable in the near future than they are today. Meanwhile, once again, even if we did exit, how would we know when to get back in? Investors who bailed during the 2008 downturn missed much of the surprise upturn that began this current bull run. Those who hung on more than made up for their losses, even though it seemed like every year would be the bull market’s last.

It’s nearly certain that there will be a lot of scary headlines between now and the end of the year, and it’s possible that the investment roller coaster is about to get bumpy. All of us wish that we had a working crystal ball to help us navigate through uncertainty, but all we have is the historical record, which says that after the next downturn, the market will eventually experience a new high. We want to be there to celebrate it.