Here’s a trick question: what is the biggest danger to your long-term investment results? If you answered something like “market downturns” or “downside volatility,” you’re not only missing a bigger danger, you may be missing the way investment markets work. 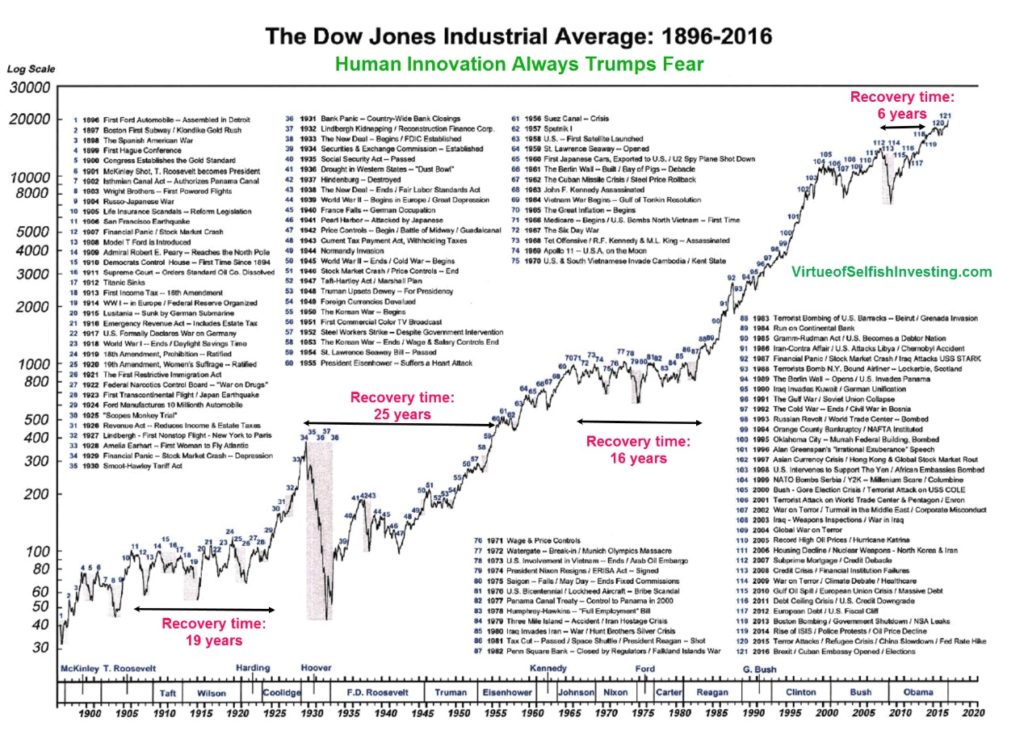 As you can see from the accompanying chart, there have been a lot of market setbacks since 1896, and yet the overall trajectory of the market (as you undoubtedly already knew) has been a fairly steady rise. The longest recovery times in modern history—25 years during the Great Depression, 16 years during the stagflation period of the 1970s—are also the only times when someone with a time horizon of more than 10 years would have seen a loss after hanging tight for the full decade. The recovery time from the severe downturn in the Great Recession was just 6 years.

And this chart is a logarithmic trajectory, meaning that the jump from a Dow of 10,000 to 20,000 is roughly the same as the jump from 30 to 50. The trajectory would have been much steeper if plotted on an arithmetic basis.

So what’s a bigger danger than something awful like the Great Recession? Investment experts talk about a human failing called “policy abandonment,” which is a fancy way of saying that the investor bailed on the markets, generally at the wrong time. Suffering a significant decline in the Great Recession was temporarily painful, but what about the people who abandoned their portfolio allocations and retreated to cash at or near the bottom, because they just got too nervous about what the market would do the next day or the day after? They locked in those losses, moved to the sidelines and found themselves with permanent—rather than temporary—portfolio losses.

The lesson of the chart, as its author Chris Kacher points out, is that the stock market is long-term driven by the intelligence, creativity, innovation and hard work that people working in various companies put into their jobs every day. The value of companies tends to rise, but fear sometimes makes people sell their stock at lower prices which, up to now, have always recovered to reflect that growing value.

The recent turmoil in the markets is certainly unsettling, but it’s nothing compared with the Great Recession, the Great Depression—or, probably, the next significant bear market, whenever it comes. That next downturn will present us with the illusion of danger (a temporary market decline) and some will take the opportunity to embrace real danger—the danger of “policy abandonment” that makes temporary losses permanent.

Please Note: This article is used with permission from a newsletter to which KFG subscribes. It is for our