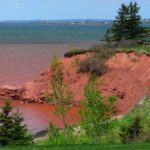 One of the less-publicized impacts of climate change, amid the greater number of hurricanes and new flooding in the American Midwest, is soil erosion. A new report suggests that increases in soil erosion, caused by a greater number of dry days interspersed by heavier rains, is costing the world $8 billion a year.

Changing temperatures are only one factor in this emerging ecological disaster. Another is land use change by humans, particularly when developers and builders clear out vegetation that helps to hold soil in place. Take together, the European Union Joint Research Centre came up with the $8 billion estimated annual cost, and also declared that worldwide food production has been reduced by 33.7 million tons a year.

The most vulnerable countries are those with a large proportion of agricultural land: the majority of Caribbean countries, Brazil, Central African countries, and parts of Southeast Asia. There, soil erosion is occurring on more than 70% of arable land, compared with 3% in countries like the European Union, Australia, Canada and Russia. India and Indonesia are experiencing the largest hit to their GDP—estimated to be 0.1% of GDP a year.