You can be forgiven for wondering what all the hoopla was about when, on August 22, the newspapers erupted with the announcement that the current bull run in the U.S. stock market was the longest in history. Weren’t the day before and the day before that part of that run?

The answer is no. The S&P 500 index had to get back up over its previous high (set way back in January) in order for the streak to continue; otherwise, the period after the previous high might would been counted as a precursor to a bear market. So the roughly six and a half months of the current bull were technically in limbo until the markets again breached the record. 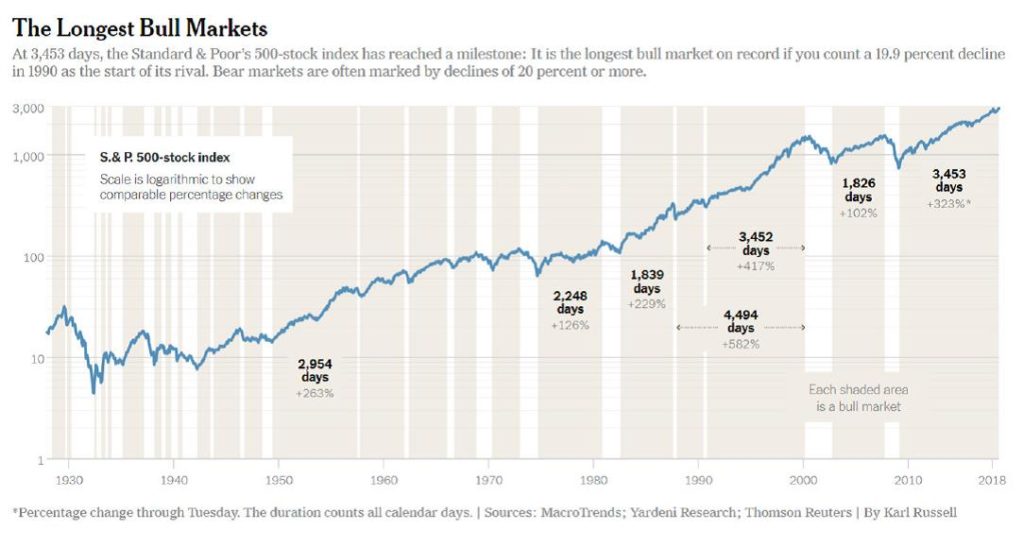 How, exactly, do we define a bull market? The most popular definition is a period that starts at the bottom of the previous bear market (a market drop of at least 20%), and continues moving up without a new bear market drop of 20%. By that narrow definition, the current bull market has now extended to 3,453 days, and it may have a bit more to go before it ends.

During the period since March 9, 2009, the index has gained 321% in total—almost exactly tripling in value, not counting reinvested dividends. By this measure, we are definitely not in record territory; from June 1932 through March of 1937, the markets gained 325%, or about 36% a year. Some define the period from October 1990 through March 2000 as a bull—and lucky investors who bought and held during that period saw total gains of 417%, or roughly 19% a year. By contrast, the current bull has delivered still-respectable 16.5% annual returns.

Of course, whenever the markets go up for this length of time, investors get nervous—and that’s not surprising, since every other bull market in history had turned back on itself by this time. But the length of a market upturn is really not a good way to determine whether the markets are a good place to invest; the market environment, and things like corporate revenue and profits, borrowing costs, inflation and the health of the economy are all much more important indicators than whether stocks have managed to avoid a 20% drop over some arbitrary period of time. 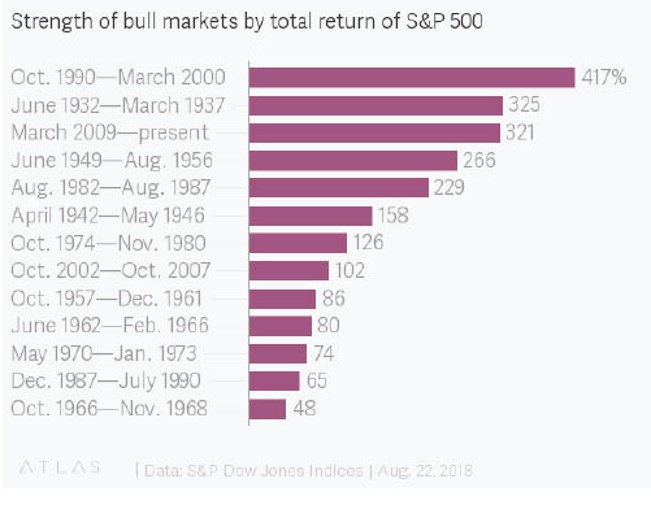 The bottom line here is that markets are SUPPOSED to go up; that is, all the hard work put in by all the workers at all the companies that make up the U.S. economy should be adding value every day, week, month and year. If the markets were to trend downward for any significant length of time, that would mean that the companies (and their workers) are somehow failing to add value. If you believe that is about to take place, then this might be a good time to take your money off the table. Otherwise, hang on and recognize that all good things come to an end, and there is a bear market waiting for us at some indeterminable time in the future.

The Happiest States in the USA
106 Things We Do For Clients, No. 92