If you answered “gold,” you’re not far off: gold is currently selling at “just” $1,300 an ounce, more or less, depending on what day you’re in the market. Platinum, which might have been your next guess, is selling at decade lows, now priced at only $880 an ounce. You can buy an ounce of silver for merely sixteen bucks.

But if you guessed palladium, you’re right on the money. Palladium’s spot price recently passed gold. It now sells at more than $1,500 an ounce. 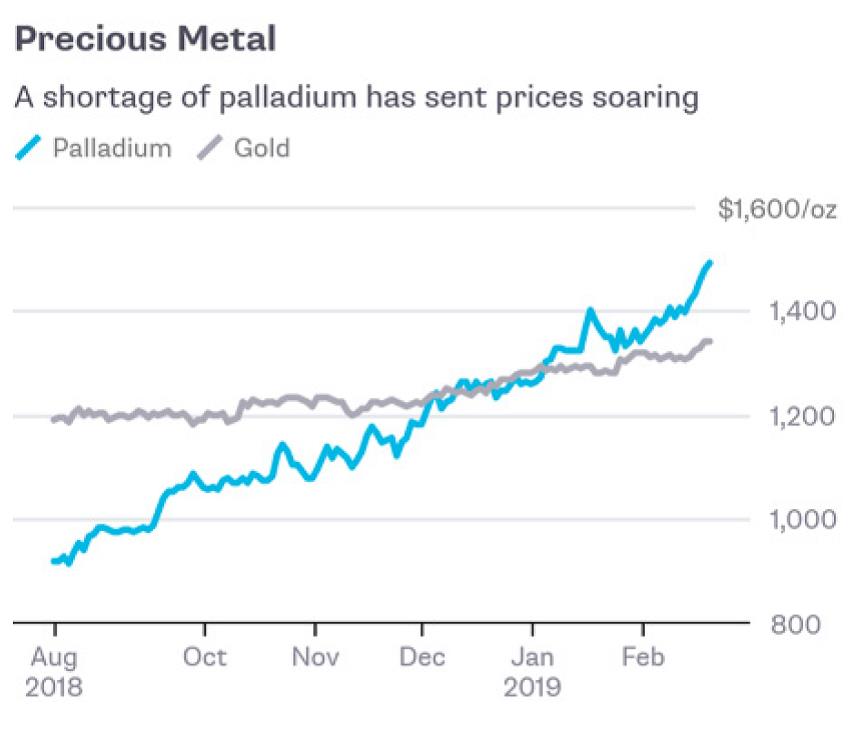 Palladium is a lustrous white material that is mined as a byproduct in platinum and nickel mines. It’s in the chemical family with ruthenium, rhodium, osmium, iridium and platinum. In industry, palladium is primarily used in the exhaust systems of gasoline-powered cars, part of the process that turns toxic pollutants into carbon dioxide and water vapor. But there are also uses in electronics, dentistry and jewelry.

Palladium was not always this expensive. The metal’s price has risen dramatically since last August, largely as a result of tighter emissions restrictions in the auto industry that have created surging demand. Output from mines in Russia and South Africa has not kept up with demand, which is driving up prices, and some hedge funds are betting that prices will rise still further.

This makes for an interesting investing story, because based on these facts, you might be tempted to join the hedge funds and bet the farm on further increases. But there are cautionary tales in past metallic price movements. In the decade following 1998, platinum’s price soared more than 500 percent on widespread shortages, before the auto industry found palladium as a substitute. Rhodium’s price went up more than 4,000 percent over a similar period before car makers found ways to use less of it. Today, as costs rise, there is talk of finding alternatives to palladium-based catalytic converters. And, of course, if electric cars take over the market—and flood the roads with autos that don’t have an exhaust pipe—then palladium might someday be as cheap as silver.