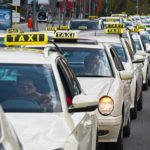 In the long and interesting history of Wall Street’s initial public offerings, the recent stock offering by ride-hailing company Uber Technologies, Inc. might go down as one of the strangest. Investors were invited to pay $45 a share for the opportunity to participate in the profits of a company that lost a whopping $3.04 billion last year on revenue of $11.3 billion. Over the past three years, the company has lost more than $10 billion, according to regulatory filings. Yet the initial offering valued the company at roughly $80 billion.

Moreover, there is no evidence that this interesting financial performance is poised to turn around. Lyft Inc., a rival ride-hailing firm, provides competition, although it, too, is reporting quarterly losses exceeding $1.1 billion. Meanwhile, there is no reason why another company—or several—couldn’t set up a computerized algorithm matching ride hailers on their smartphones with drivers who also have smartphones—after all, the entire arrangement is nothing more than an app.

What makes Uber even less attractive is its contentious relationship with its drivers, who provide 100% of the actual service to customers. On one day this past week, thousands of Uber drivers across the U.S. turned off their apps in a strike over pay and working conditions. In a securities filing, Uber stated that it had reached an agreement with some of the 60,000 drivers who are contesting their status as independent contractors, and who had instituted arbitration proceedings against the firm. Total cost, including attorney’s fees: in the $150 million to $170 million range.

In light of all this, it may not be totally surprising that in the first day of open trading, Uber shares were down roughly 8.8% from the offering price. Some analysts are wondering not only if Uber will ever earn any profits, but whether it should attempt to as it builds market share against cab drivers and rival ride-sharing apps.

If your idea of a great investment is a company that is leaking billions in losses and may never earn a profit, Uber looks like the perfect anchor for your portfolio.

Who Pays in the Tariff Wars?
Predictions Gone Awry