Quick: What’s America’s national savings rate? A generation ago, you might have guessed 10% and been pretty close to the market. More recently, there has been a lot of hand-wringing about a precipitous decline in how much of their income Americans are saving—down, according to the U.S. government’s Bureau of Economic Analysis, to just over 2% this year. There was a brief period after the Great Recession when people were saving at higher levels, up to nearly 9% according to BEA figures, because they were getting serious about paying off debt. But the trend has been pretty dismal since then.

Except…. The BEA went back to the numbers and realized that it had been wrong about the U.S. savings rate, at least since the beginning of 2002. You can see in the chart its previous estimates (blue line) and revised ones (red line) which show a savings rate, currently and pretty consistently after the post-recession spike, of 6-7%. The hand-wringing was unnecessary. 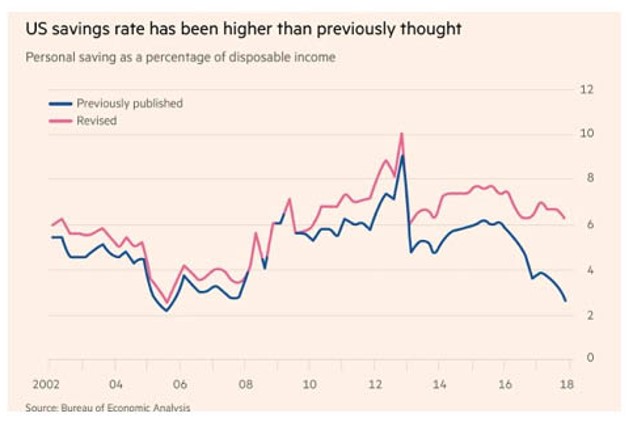 What happened? DEA researchers pull information from a variety of sources, in order to determine average income levels and average total expenditures. The difference is assumed to be the savings rate. The revised figures came when the researchers took a second look at data coming from the IRS, and realized that small businesses were not claiming their full income due to a variety of deductions they were entitled to. That revision caused the aggregate savings rate to jump.

What does that mean? It means that many people are still living somewhat precariously, saving far too little for emergencies and their future retirement. But those who own businesses are doing much better than anybody at the government apparently realized—and the economy as a whole has enough capital from savings to sustain it without fear of low savings triggering a looming recession.

The Happiest States in the USA
Greek Crisis Continued