Last year, the big news in the U.S. economy was the dramatic fall in Brent crude oil prices, from just under $110 a barrel last July to something less than $45 a barrel in mid-March. Since then, oil prices have jumped back up to more than $60 a barrel. Does that mean the era of cheap oil is over? 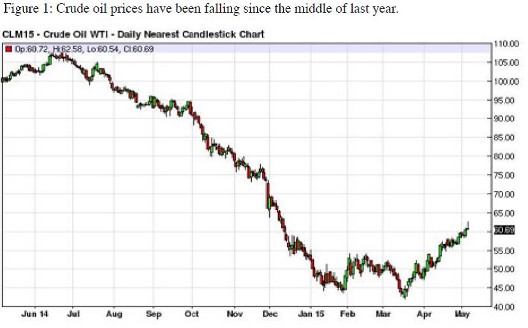 Probably not, say the experts. Bill O’Grady, at Confluence Investment Management, points out that U.S. energy production, when you add 9.2 million barrels per day of oil production to 1.0 million barrels per day (equivalent) of natural gas, is the highest it has ever been, even higher than the production levels during the OPEC oil embargo in the 1970s. Meanwhile, Saudi Arabia appears to be pursuing a multi-pronged political agenda by keeping its pumps working overtime: when the world’s largest oil exporter drives down the global price of oil, it harms the economies of Russia and Iran (which need higher oil prices to prop up their domestic economies) and also discourages even higher oil production in the U.S. At the same time, the Saudi effort to suppress oil prices also suppresses the economic drivers of alternative energy, by making solar and nuclear power seem expensive compared with oil-generated electricity.

Meanwhile, more oil is on the way. Iran’s oil minister recently announced that if/when sanctions on the country are lifted, it will raise its oil production from 2.7 million barrels a day to four million over the subsequent eight months.

The recent Confluence report also offers a couple of very interesting statistics. First, the average citizen of planet Earth consumes about 4.7 barrels of oil a year in energy use. That in itself may not be surprising; what is striking is that this number has barely fluctuated since 1983, and is down from 5.3 barrels in the late 1970s. There are huge differences among countries. U.S. citizens, on average, consume 21.8 barrels a year, while the average Chinese resident consumes 2.9 barrels.

The other interesting statistic is the declining amount of energy required to produce an inflation-adjusted dollar of economic production in the world. In 2013, the most recent year this data has been collected, the figure was the lowest it has ever been, and is more than 50% lower than in 1980. 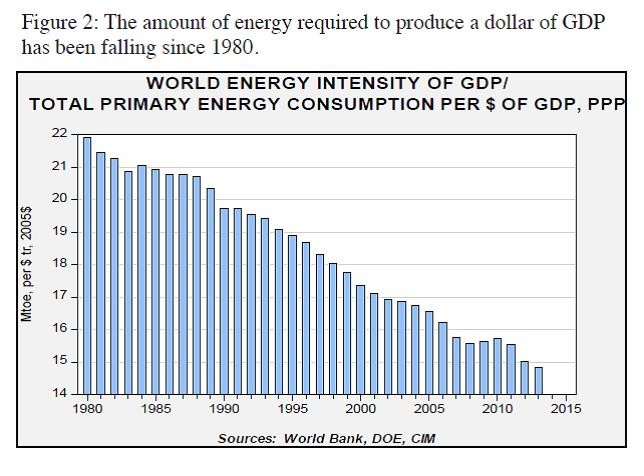 The world economy, in other words, is at least 50% more efficient in its energy use than it was 30 years ago, and that efficiency has been increasing steadily over that three-decade period. Last year, European oil use hit its lowest level since the mid-1990s, and U.S. oil demand peaked in 2007, and is expected to fall by between 1.8 million and 2.7 million barrels a day by 2035. In an op-ed piece in the Wall Street Journal, economist Steve Yetiv says that as economic growth becomes increasingly disconnected from oil in the next 20 years, attention will shift to scarcities in food, water and minerals.

None of this guarantees that oil prices will fall back to their mid-March lows, but it does suggest to energy experts that the recent rise in prices won’t take us back to last year’s $100+ prices either. Yetiv speculates prices in the range of $52 to $68 a barrel for the foreseeable future. Translated, that means the days of (relatively) cheap oil could be with us for a while.

The Next Bailout
The Harm in Financial Journalism