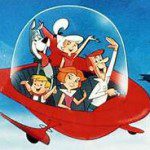 Some of us of a certain age remember when futurists in the 1960s predicted that those of us lucky enough to live in the world of the year 2000 would be taking vacation trips to the Moon, talking to each other via videoscreens, and commuting to work in flying automobiles like the one George Jetson flew in the popular TV cartoon series.

Fifty years later, Skype and Facetime users would say that videoscreens have exceeded those early expectations, and at least a few astronauts have managed to hop awkwardly around the craters of the moon. But the next time you’re on the road, take a careful look around. We’re a full decade into the second millennium.  Do you see any flying cars?

That could change as early as three years from now, thanks to two pioneering efforts that are approaching the flying car market from different directions. A U.S. company called Terrafugia has created a prototype combination of aircraft and automobile, called the Transition, whose wings can fold up on the ground so it can drive on the road and fit into the average garage. It runs on regular automotive gasoline, so owners can fill up at the local gas station–assuming such things will still be around as electric cars begin taking over the roadways.

The Transition can fly at 100 miles an hour, and fuel efficiency is not bad: 20 miles to the gallon in the air and 35 MPG on the road.  A newer prototype, the TF-X, will take off and land vertically, and travel as fast as 200 mph in the air. The company says that people can learn to fly these vehicles in just five hours.

Meanwhile, a Dutch company called PAL-V has created a combination motorcycle/helicopter which is driven in the air by an engine-powered propeller, and lifted by a rotor. Its maximum speed in the air is 112 miles per hour.

When will you be able to drive to work like George Jetson? Both vehicles have been tested in the air and on the ground, but both companies expect to continue testing under severe weather and ground conditions before they finally bring flying cars to market. The Transition is expected to go on sale in 30-36 months, while the PAL-V1 could be on the market in late 2015 or early 2016.

Are One in Five Americans the “New Rich”? Not Exactly.
Bitcoins: Investment or Bust?

One Response to Your Chance to Buy a Flying Car