Leaving Money to Your Kids–Or Not 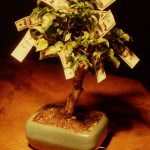 “I’ve never seen money passed from one generation to another in a manner that actually benefited the recipient.” When a psychologist said this to me several years ago, I was dumbfounded.

Many parents scrimp, save, and sacrifice so they can “leave something to the kids” with the intention of doing them good. It’s hard to accept that inheritances may actually do harm instead. Most of us have money scripts that don’t support this idea.

Typically, I used to hold several money scripts around inheritances. One was that leaving money to your children is a loving thing to do. Another was that parents should always leave their money to their children. A third was that anyone who received an inheritance would invest it wisely, using only the earnings to improve their lives.

Today I know those money scripts were not universal truths. I have more understanding of the problems involved in giving money away in a manner that is beneficial to the receiver. It isn’t as easy as I once thought.

Many parents envision inheritances for their kids as “seed money” that will be used for the health, education, and welfare of their offspring for many generations. Research shows that is rarely the case; instead, inherited wealth does not last long. Missy Sullivan summarizes some of the research in “Lost Inheritances,” a Wall Street Journal article published online March 7, 2013. According to this article, 70 percent of those who receive an inheritance of any size spend it all in their lifetimes. For the 30 percent that do have something left to pass on, 70 percent of their kids also blow everything they get. That means by the end of the third generation, 90% of the money originally passed down is gone.

While it’s easy to understand how an inheritance of $10,000 may evaporate, it’s difficult to understand that inheritances in the hundreds of millions evaporate just as quickly. How is that possible? Is the average American just incompetent at managing money?

According to Sullivan, a study done by the Williams Group found that poor investment decisions were not the culprit. About 60 percent of large inheritances disappeared because of a lack of trust and communication between family members. Another 25 percent of the time, money evaporated because the parents failed to prepare the next generation to handle their impending inheritance. Poor investment advice and high fees were the cause in less than 15% of cases.

If more high net worth parents knew that only 10% of their hard-earned estates would be around at the end of their grandchildren’s lives, I wonder if they might do a few things differently.

One option would be to address the two biggest issues—lack of communication and preparation for heirs—head-on during their lives. Parents wanting their money to benefit their kids could engage the services of a financial therapist who could help the family address their communication and trust issues long before they pass on their wealth. Preparing their children to manage wealth and use it wisely would be the best way to increase the odds of making an inheritance a blessing rather than a burden.

Another option would be to secure their own retirement, then forget all the scrimping and saving and just have fun blowing the money on themselves.

Still another option would be to give their wealth to worthy causes during their lifetimes or upon their deaths. This would leave the kids to make their money by ingenuity, hard work, wise money management, frugality, and a little bit of luck. The same way, in fact, their parents did.