What’s the Backup Plan if You Don’t Die Broke? 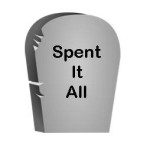 In a recent column I reported on a survey done by the financial services company HBSC that found only 59% of US parents intend to leave their children an inheritance, the lowest of the 15 nations in the survey. The fact the US is last came as no surprise to me. What did surprise me was that 59% seemed high.

My average client is someone who has saved over one million dollars. I am guessing that less than 2% of them have any intention or goal of constraining their current lifestyle in order to maximize their kids’ inheritance. Consuming their last penny of savings about the time they take that last breath is their spending plan of choice. There is even a name for these folks: “Die Brokers.”

If they did a good job of planning for retirement, however, most Die Brokers will leave something behind. Almost all of these I work with intend to divide what remains equally among their children. The point is that leaving an inheritance just isn’t a priority or a goal that constrains their current spending. As a side note, I rarely see any intention to leave any significant portion of their estate to charity.

Why did the survey find such a high number of parents who intend on leaving their kids an inheritance, as compared to my observations that almost none intend to? My experience is that most people have a money script of, “Good parents should leave something to their children.” It is similar to another money script of, “Good parents should pay for their children’s college education.” These are seen as things “good” parents do. My hunch is that when most respondents answered the survey question, they let their money script do the talking, rather than their true intention.

One of the most common themes among my affluent clients is a desire to see their children “make it on their own.” Over 90 percent of these clients are first-generation wealth builders, meaning they didn’t inherit their money but accumulated it from saving, investing, or building a business. They value hard work and frugality and feel leaving a large inheritance to a child is more hurtful than helpful.

Many of these first-generation millionaires also feel accumulating wealth in the US is very attainable with hard work, discipline, and frugality. This is not the case worldwide. In many countries, it doesn’t matter how hard you work or how frugal you are, confiscatory taxes and oppressive regulations insure that those people not fortunate enough to be born into money will never have a chance to become affluent. The only way to have a comfortable net worth in many countries is to either inherit it or work for the government.

Sadly, the US is closer to adopting a model that makes accumulating wealth increasingly difficult. I can’t name a politician currently campaigning who advocates lowering income taxes on wealth builders. Yet I can name scores who are running on increasing taxes on “the rich.”

Affluent parents in the US may soon begin to feel that, without an inheritance, their children may never have the means to get ahead. If more US parents begin believing this, we will probably see increasing numbers intending to leave money to their kids. The money script of “Good parents should leave something to their children” might become the truth.