Why We Don’t Plan For The Inevitable 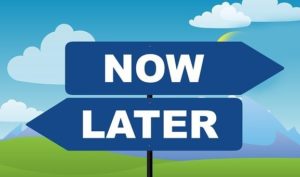 Probably nine out of 10 people would agree that planning makes sense. Just knowing that we “should” plan, however, isn’t going to change most financial behaviors. We already know what needs to be done. The bigger question is why we put off doing it.

When we drill down, the answer to that question is almost always emotional. Our procrastination often has deep roots in anxiety, fear, and grief.

Many of these blocks to planning can be tied back to things we experienced earlier in our lives that were never resolved. For example, I once had a client, a business owner in his 50’s, who had committed to contributing several thousand dollars a month to his retirement plan. He knew he needed to prepare for retirement; in fact, that was the main reason he had engaged my services. He himself had decided on the monthly amount. His business was thriving, and he could easily afford to make the payments. Yet he never managed to get around to sending them.

When we discussed this, he couldn’t come up with any reasons for his procrastination. Finally, I asked him, “What does retirement mean to you?” He pondered this for some time and finally responded, “It means I die.”

He went on to explain that every male in his family had died within two years after retiring. He didn’t want to retire, or even think about preparing for retirement, because he wasn’t ready to die. Retirement to him didn’t mean moving into another phase of life; it meant the end of life.

I suggested to him that maybe retirement could mean that you get to do what you want, when you want, with whom you want. We also worked with the idea that preparing financially for retirement did not necessarily mean he had to retire before he was ready to do so. Once he became aware of this emotional block, he began making the contributions to his retirement plan.

The reasons that block us from acting to support our future financial well-being can be both internal and external. If you are putting off some sort of financial action that you know is important, you might consider whether any of the following factors may apply:

With help, these issues can be resolved. The first step is to identify them and begin to understand how they block you from taking the action you know to be important for your financial health.