College, COVID, and the Costs of Online Learning 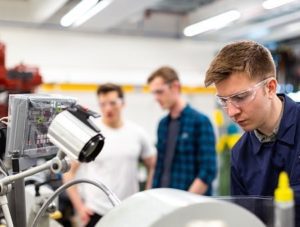 By the time he was eight, my son knew he wanted to become a mechanical engineer. He also was clear that he would attend the South Dakota School of Mines and Technology, one of the better value engineering schools in the nation. He never wavered on that intention, enrolling in SDSM&T last year after being awarded a very nice scholarship.

Like millions of his peers, my son didn’t have a good college experience his freshman year. Thanks to COVID-19, he finished most of his second semester online, which was especially difficult for a mechanical engineering student who relishes hands-on learning. “I sure didn’t get my money’s worth that semester, Dad,” he told me. I had to agree.

This fall, he was excited over the university’s plan to hold in-person classes with social distancing, mandatory masks, and frequent cleaning. On his first day of school he learned that he would be attending one class a week in-person, and the rest would be online.

That same day he dropped out of college and left his scholarship behind, saying, “Paying $11,000 a year for on-line learning is a rip-off, even with my scholarship.”

He immediately enrolled in Western Dakota Tech, a local technical college that guaranteed in-person instruction for a one-year course to become certified in Precision Machining Technology.

This isn’t at all the educational track either he or I envisioned for him. Neither we nor the university anticipated that a pandemic would largely derail college education for him and thousands of others.

Neither of us know if in-person classes will resume soon enough for him to obtain a degree in mechanical engineering in the relatively near future. In the meantime, he is excited to learn a marketable skill that will allow him to earn a good living doing the hands-on work he enjoys.

One fact he discovered was that as of August 31, 2020, the average annual pay for Precision Machinist jobs in the United States is $45,041 a year. South Dakota ranks number 18 out of 50 states nationwide for Precision Machinist salaries. That’s after one year of college. Also, the skills he will learn are complementary to a mechanical engineering degree, should he decide to return to SDSM&T.

He summed it up this way: “Dad, I figure I’ll spend $9,000 in tuition for this one-year program and be able to earn five times what I spend for the education almost immediately. At Mines, I would spend close to $50,000 over four years, (without room and board), and earn a starting salary of around $65,000. It looks like the technical school is a pretty good buy.”

As a one-time college dropout myself, I can’t fault his decision. It might even be as financially prudent as going to medical school, according to a study by Laurence Kotlikoff, professor of economics at Boston University, reported in the September 2, 2011, Investment News.

Kotlikoff compares two students, neither of whom borrow for their education. One becomes a doctor and the other a plumber. After 11 years in school, the doctor earns $185,895 annually. After two years in school, the plumber earns $71,685. When accounting for the educational costs, foregone earnings, federal and state income taxes, payroll taxes, Social Security benefits, and Medicare Part B premiums, the doctor’s sustainable spending year in and year out from age 19 through 100 is $33,66. The plumber’s is $33,243.

Obviously, someone who wants a medical career won’t choose plumbing instead based on these numbers. Yet in many fields, a technical education rather than a college degree is an option well worth exploring. It can be a cost-effective alternative path to a satisfying career.