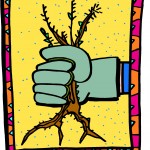 What is capitalism? How does it work? For some time now I’ve been meaning to write a column on that topic, but it has seemed to be a daunting task more fit for an economist than a financial planner.

Then I remembered this story from my childhood.

One summer, we were visiting my grandparents. I was about ten and my brother was seven. Our grandfather hired us to weed his garden, paying us a dime apiece.

That seems like a paltry sum, but it wasn’t such a bad wage for a couple of kids at the time. After all, a bottle of soda only cost a nickel.

We started off to work. The day was hot. The garden seemed huge. I kept thinking about getting a bottle of soda and sitting in the shade. Pulling all those weeds seemed like a huge price to pay for that reward.

Then I had a brilliant idea. “Dave,” I said, “How would you like to earn an extra nickel?”

My brother was interested. I offered him the opportunity to weed my half of the garden for half of my dime. It seemed like a good idea to him, and we made a deal.

David weeded the entire garden. I bought a bottle of Coke with my nickel, sat in the shade, and watched him work. When the weeding was finished, he was tired and hot but had fifteen cents to show for his labors. I was broke, but I had enjoyed relaxing with my soda instead of having to work in the hot sun.

It seemed like a win-win situation to me. My grandfather didn’t see it the same way. In his view, I had taken advantage of my innocent younger brother by coercing or manipulating him into doing my work for me. I’m not sure Granddad ever forgave me for what I did that day.

I suppose there may have been a tiny grain of truth in his perspective. After all, I was three years older than my brother. However, I don’t remember any bullying or manipulation being involved. I simply offered him a deal, and he took it. The transaction involved a willing seller and a willing buyer. One thing of value—his work—was exchanged for another thing of value—my nickel. He benefitted from receiving more money, and I benefitted from not having to perform manual labor.

Thinking about it all these years later, it occurred to me that what I did was exactly the same thing my grandfather did. Each of us paid someone else to do a task we didn’t want to do. And each of us got the job done at the lowest cost to ourselves.

For Granddad to accuse me of using my position as the oldest to take advantage of my brother wasn’t quite fair. After all, one could say he used his position as a grandfather to get cheap labor out of a couple of little kids. I suppose one of his aims was to teach us about the value of hard work and the satisfaction of being paid for our efforts. The lesson I learned wasn’t exactly the one he had intended to teach.

The whole process, though, was a small example of capitalism at work. It was a lesson I took to heart.

My brother must have done the same. He’s still a hard worker, and he’s certainly been a very successful capitalist. And when his son was a teenager and I hired him to do my yard work, I had to pay him a lot more than a nickel.