With all the supply chain chaos, inflation, and uncertainty in the economy, this year is a perfect time to celebrate Christmas in the manner of Ebenezer Scrooge.

If you’re superficially familiar with Dickens’s A Christmas Carol, the first thought that may come to mind is that I’m suggesting you celebrate Christmas like a cold-hearted skinflint. After all, Ebenezer Scrooge is probably the most famous miser in literary history. With the current economic uncertainty, most of us could logically support following his example of spending less, or even nothing, as we observe the holidays. 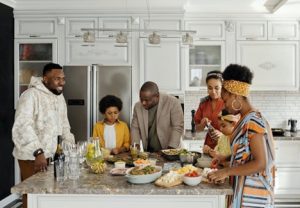 Perhaps we could look at this a different way, however, and consider celebrating Christmas in the way Scrooge did after the visits of the Spirits of Christmases Past, Present, and Future transformed him. This might seem as if I’m going to the opposite extreme and advising you to go overboard and buy lavish gifts for everyone on your list. That’s not it, either. After all, A Christmas Carol does not end with, “Then Scrooge maxed out his credit cards to buy Tiny Tim the latest smartphone and get the Cratchits a big-screen TV.”

It is true that when the transformed Scrooge woke up and realized it was still Christmas morning, he promptly started spending money. He bought a prize turkey for the Cratchit family’s dinner, lavishly tipping the boy who took his message to the poulterer. He donated generously to a charity he had previously spurned. Nor did his spending stop with the holiday. He substantially raised Bob Cratchit’s salary, continued his charitable giving, and increased what he spent on amenities in his home and office.

As a wealthy man who had previously deprived himself of even basic comfort, Scrooge could certainly afford his new buying habits. In fact, had he been one of my clients, I would have been relieved to see him recover from his previous dysfunctional underspending. His new level of spending was appropriate and reasonable, supporting his own financial and emotional wellbeing, as well as that of others.

The other changes Scrooge made after his encounter with the Spirits of Christmas were even more meaningful. He went to church, went to his nephew’s house for Christmas dinner, and reached out to people around him. He relearned how to laugh and play games. He rediscovered kindness and joy.

Above all, Scrooge rediscovered human connection. He mended his relationship with his nephew. He became not only a good employer, but also a friend and mentor to Bob Cratchit and his family, to the point of being “a second father” to Tiny Tim.

The most important elements in the life of the transformed Scrooge were charity, spirituality, and, above all, connection with friends and family. As Dickens put it, “He became as good a friend, as good a master, and as good a man, as the good old city knew.”

The story of Ebenezer Scrooge has long held special meaning for me. It seems especially relevant this year. Depending on how the current economic uncertainties affect your financial circumstances, this may well be a good year to practice thrift. Even more important, though, as we are recovering from the isolation and emotional impact of COVID, are the lessons of connection that Scrooge took to heart.

Observing the Christmas season doesn’t necessarily have much to do with the amount we spend on gifts. Even so, we can still celebrate in the manner of the transformed Scrooge—by giving what we can, by opening our hearts and our lives to others, and, especially, by sharing this time with those we care about the most.

God Bless Us, Every One.