Staying Calm at the Edge of the Fiscal Cliff

by foxcraft | Healthy Money Relationships, In The News, The Economy, Weekly Column 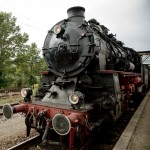 So the economic train is speeding faster and faster, and the edge of the fiscal cliff is getting closer and closer, and the passengers are starting to scream. Meanwhile, the guys in the cab of the engine are arguing about whether to hit the brakes or blow the whistle.

What’s the best thing for an investor to do? Nothing.

Based on my emails this week from clients and readers of my column, there seems to be widespread concern among investors that we’re on the verge of panic and the markets are about to head south.

It reminds me of the good old days, back in the fall of 2008, when the markets were dropping 900 points a day. I’m sensing that the fear among investors about going over the fiscal cliff is similar to the fear of four years ago. The only difference is that the markets aren’t falling today.

Those who assume the markets are about to drop may be right. If that’s the case, what should you be doing to your portfolio to prepare? Assuming it is globally diversified, not a thing.

Many investors already are sitting on the sidelines in bonds, shifting through a plethora of bad news and waiting for markets to tank. They have good reason for their expectations. There has been a steady stream of bad news over the past year: a feeble global economic recovery, the near certainty the US will raise taxes and cut spending (a/k/a the fiscal cliff), staggering budget deficits around the globe, the prospect of a Eurozone breakup, a highly negative and divisive presidential election, banking scandals, and a nationwide drought.

Considering all the uncertainty, it’s easy to explain why investors have generally favored bonds over stocks during the past 12 months.

With all this bad news, one could expect stocks to be down significantly. For the 12-month period ending September 30, 2012, however, 40 markets had positive returns, with six countries—including the US—delivering a total return in excess of 30%. This is according to the investment analysis firm Morgan Stanley Capital International.

While most investors think successful investing requires constant attention to current events, research says the opposite is true. The more that investors pay attention to the breaking news and adjust their portfolios, the lower their returns.

But with the looming fiscal cliff, shouldn’t a wise investor bail out now and then buy back in at the bottom? It would be like jumping off the train before the crash, then waiting until it has hit the ground, been repaired, and is back on track before you get on again. The only problem is there’s no way to know whether the markets will go down, or if they do, how to know when they hit bottom and it’s time to get back in.

The worst action you could take right now is to sell out your portfolio and go to cash.

If you have a globally diversified portfolio, the US decision to tax more and spend less will have much less impact. For example, our typical 60/40 portfolio only has 13.5% in US stocks and 25% in US bonds. Over half of it is in international stocks, bonds, and non-US correlated investment strategies. It’s designed to cushion even extreme fluctuations in the markets.

Anyone who is appropriately diversified has no need for fear as we get closer to plunging off the fiscal cliff. To protect your investments, don’t sell out. To preserve your peace of mind, don’t panic. Above all, don’t jump. The best possible response is to simply stand by and watch the train wreck.