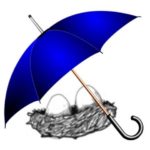 Some of the typical reasons for life insurance are to replace a breadwinner’s salary, pay off large debts, and pay estate taxes. Another reason to carry life insurance—if it’s the right kind—can be to fund a retirement plan.

To illustrate, let’s imagine a couple, both 55, with two grown children, two good jobs, and no debts. They began funding their retirement only recently. Leigh’s entire salary of $124,000 a year goes into company retirement plan options: $64,000 into the 401(k) and profit sharing plan and $60,000 into the Cash Balance plan. The couple lives on Mischa’s salary of $60,000 a year.

Their financial planner has calculated that in 10 years they will have a good chance of having $1,500,000 saved in retirement plans. This amount will allow both of them to retire, continue to live on $60,000 a year for the rest of their lives, and have enough to fund long-term care for one of them or leave a nice inheritance to their kids.

Nothing can be done to insure against the loss of a job, but there are ways insurance could help protect this couple. They could purchase disability insurance to replace 60% of the income of either partner. This would allow them to still make a reduced contribution to their retirement plan.

But what happens if either of them should die prematurely, especially Leigh? It’s doubtful Mischa could cut expenses enough to put anything significant toward retirement, instead having to work as long as possible and then rely heavily on Social Security.

This a where a 10-year term life insurance policy on Leigh would make a significant difference. If they purchased a $1,000,000 term policy on Leigh now, the premium (for a nonsmoker in good health) would be around $1200 annually. Should Leigh die this year, if Mischa invested the insurance payment it would have a high probability of growing to $1,500,000 in ten years. This would allow Mischa to retire comfortably.

However, the older Leigh and Mischa get, the less they need the insurance. If Leigh died in the fifth year of the policy, the five years of savings plus the insurance proceeds would accrue more than $2,000,000 over the following five years.

One cost-saving strategy would be to buy two $500,000 10-year term policies and drop one after five years. This would still provide for a total of around $1,500,000 in retirement funds for Mischa by age 65 if Leigh should die before that time.

If you proposed this plan to a life insurance agent, they might suggest putting Leigh’s salary into a cash value policy instead of buying term. Let’s look at that.

Contributing $124,000 into the retirement plan saves $24,000 a year in income taxes, so only $100,000 a year would be available to buy insurance. This amount would cover a policy with a $1.9 million death benefit and a cash value guaranteed to grow to $1,036,328 in 10 years. Given the extra tax payments, plus premium costs of $1 million over 10 years, that’s not a good investment for our couple. The commission of $72,500 makes it a great investment for the salesperson, though.

Besides, in this circumstance, life insurance is not meant as an investment. It is an affordable way to replace the income that covers Leigh’s retirement contribution.