A Wider Perspective on Income Inequality 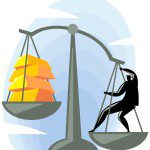 Income inequality is a topic of passionate discussion today in many of the circles I move in. The discussion typically starts with a foregone conclusion that income inequality is a huge problem in the US. Some solutions I hear include increasing the top income tax bracket to 90%, initiating an annual wealth tax, or increasing the estate tax to 100%.

While leveling the playing field will certainly solve income inequality, it won’t solve the real problem. When I say that, I often get stares of bewilderment and disdain. It isn’t unusual for people to slowly distance themselves as if I had shapeshifted into Donald Trump.

Regardless of the fact that it has not increased over the last 80 years, what is the real problem with income inequality? A common assumption is that it has created an America where most people don’t have enough to afford a minimal quality of life. But is that true?

In a column from October 2015, George Will cites a new book, On Equality, by Harry G. Frankfurt, a Princeton emeritus professor of philosophy. Frankfurt drives home a main contention that economic inequality is not inherently morally objectionable and that “doing worse than others does not entail doing badly.” His alternative to economic egalitarianism is the “doctrine of sufficiency,” which is that the moral imperative should be that everyone have enough.

Consider this. If you are a US citizen with an income of over $32,400, you are in the world’s top 1%. Globally, you are considered “rich.” Indeed, the poorest 1% of US citizens have more wealth than two-thirds of the world’s people. Clearly, income inequality in the US doesn’t inherently mean everyone in society doesn’t have enough. This would suggest that complaints about US income inequality may be in response to something other than having enough.

Perhaps the real problem is more of a “discontent of those who are comfortable but envious,” as George Will suggests. Consider this: to be in the top 1% in income in the US you need to earn over $380,000 a year. Someone earning $32,400 a year, even though they are in the global top 1%, may easily lose that perspective when viewing someone earning over $380,000. The comparison could foster discontent by stirring up feelings of envy, jealousy, unworthiness, shame, and guilt. Rather than taking responsibility for and exploring these difficult emotions, instead we often shove them deep within and demonize others.

Will suggests that the biggest underlying producer of income inequality is freedom. Freedom includes the power to choose careers, such as opting to be a teacher rather than an engineer with full knowledge that teachers generally earn substantially less than engineers. The economic and non-economic benefits of each profession are dictated by market forces, rather than those in government deciding the winners and losers.

Envy of the rich is almost timeless and universal. Properly reframed, it also can be motivating. Contrary to common perception, 85% of the top 1% did not inherit wealth but are first-generation millionaires or billionaires. Perhaps envy didn’t drive them to try to tear down what others had achieved. Instead, it motivated them to build their own success.