Digging Yourself Out When You’re Financially Stuck

Last week’s column on being financially stuck focused on getting help. But what if, for various reasons like affordability or availability, outside help isn’t a practical option? There are some steps you can take yourself to begin getting financially unstuck. 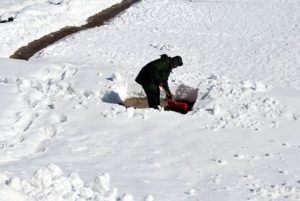 1. Become a curious observer of the “stuck” part of you. This curiosity is the opposite of shaming and criticizing yourself. Instead, gently question this part of you. What is it afraid would happen if it became unstuck and was successful? Where did it learn the tools it’s using unsuccessfully to get you unstuck?

2. Recognize that you are not the behavior. Separating yourself from your behavior is helpful for two reasons. One is to avoid shaming yourself, just as parents avoid damaging language like, “Shame on you for (behavior); you’re a bad girl,” in favor of something more constructive like, “You’re a good girl, but (behavior) is not appropriate.” Second, even apparently illogical financial behavior makes perfect sense when we uncover the core belief behind it. There is almost always an underlying good intention, even when the behavior is harmful.

3. Start a conversation with your behavior. To separate yourself from your behavior and understand the “why” behind it, consider opening a conversation with it. I use a “money dialog” exercise where you have a conversation with the part that is stuck, capturing it on paper or electronically. Start by neutrally asking that behavior why it does what it does. Then mentally switch places with that behavior and answer; then switch again and respond. This can go on for many rounds. Often this exercise results in discovering interesting information you weren’t previously aware of. I’ve seen people have life-changing awareness out of this exercise.

4. Become aware of what you’re feeling. This awareness can have transformative power. Whenever you’re about to make a financial decision, pause and ask, “What am I feeling?” This is important: Feelings are one word. At first, we’ll often respond with something like, “I’m thinking this is a dumb purchase.” No, that’s not a feeling. Ask again. “I’m not sure if I should do this.” No, that’s a thought. “What am I feeling?” Happy? Sad? Angry? Scared? Hurt? Betrayed? Keep asking until you get to one word.

It’s important to note that if you can’t easily find a feeling, you are not broken or doing it wrong. It’s normal when you start this work. If you spent years not feeling feelings, they won’t just pop up and say, “Here I am!”

5. Meditation. Mindfulness meditation, which takes practice, can be super helpful in finding feelings. The goal is to quiet the mind, to let the thoughts go and the feelings be. Don’t get hung up on the thoughts that emerge, just let them go and focus on any feelings. They are there if you look for them.

6. Tell another human being about your behavior. This isn’t something you can do alone, but it doesn’t require working with a therapist or financial professional. Find someone safe and trustworthy, then work up the courage to tell them something you haven’t told anybody else about your stuck financial behavior. Why? There’s a saying in therapy: “You’re only as sick as your secrets.” It’s helpful just to get that secret out. And chances are you’ll get some support or even learn you aren’t the only one who struggles with being financially stuck.

Finally, take advantage of resources to use on your own. Therapist Britt Frank, for example, has both podcasts and a helpful upcoming book, The Science of Stuck. Being financially stuck is not a permanent condition or character flaw; it is a circumstance that can be changed.