Financial Transformation of Ebenezer Scrooge: Clarity in the Present, Building for the Future

Gaining the emotional awareness to transform our relationship with money requires taking a difficult but critical journey into the past. As described last week, Ebenezer Scrooge made that journey with the guidance of the Ghost of Christmas Past. Only then was he ready to see the reality of the present with more clarity. 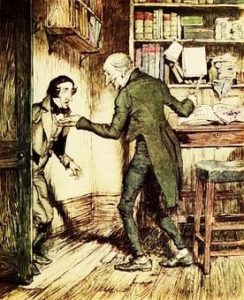 While Scrooge was less resistant to looking at the present than the past, his time with the Ghost of Christmas Present still terrified him. Facing the need to replace faulty beliefs with accurate cognitive information is very challenging. Yet it gives us the emotional and cognitive bandwidth for learning about budgeting, debt reduction, investments, and other financial skills.

Once we look at “what is” rather than “what we thought it was,” we can begin to create a future that is consciously and deliberately planned. We can take control of our money rather than our money controlling us. Our guides can be financial advisors and financial mentors.

Many of us try to shortcut the transformation process by starting here, in the last step of looking toward the future. Sadly, without first taking the critical steps of viewing the past and learning the present, we often lose heart. This is why resolutions for financial change often fail, not because the goal is bad or unattainable, but because we are unprepared to go into action.

The end product of Scrooge’s difficult journey with the three Spirits was a transformed person, full of joy, generosity, and spirit. He experienced this transformation because he had the courage and conviction to start the process. Let’s take a closer look at what this once-miserable millionaire did after his encounter with the Spirits of Christmas changed his life.

When he woke up on the first day of his new life to discover that it was still Christmas morning, these were the actions he took:

Certainly, after his visits from the Spirits, Ebenezer Scrooge spent more money than he had done before, both during the holidays and during the rest of the year. It was money that he, as a successful man of business, could well afford to spend. But nowhere in A Christmas Carol does it say, “Then Scrooge took his credit card to the mall and went into debt to buy Tiny Tim the latest video game system and get the Cratchits a big-screen TV.”

Instead, notice the most important elements in the life of the transformed Scrooge—charity, spirituality, and, above all, friends and family. He mended relationships, took steps to help those in need, and began to welcome people into his life instead of pushing them away. As Dickens put it, “He became as good a friend, as good a master, and as good a man, as the good old city knew.”