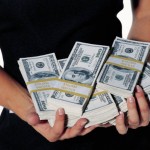 Try to imagine the enormous range of possible financial conditions in which human beings can live. At the lowest end is bare subsistence—the minimum food and shelter possible to sustain life. At the highest end is unlimited wealth—multi-billionaires with more than they, their children, and their grandchildren could possibly spend.

Most of us, of course, live in relatively narrow bands somewhere in between these extremes. In Wired for Wealth, we describe these bands as “financial comfort zones.” People who share a financial comfort zone tend to have similar incomes, lifestyles, spending and savings habits, and beliefs about money.

For those growing up in wealthy families, “normal” may include private schools, international travel, live-in household help, and expectations of an Ivy-League education followed by a lucrative career.

Those growing up in families with limited incomes will inhabit a much lower financial comfort zone. Their “normal” might include shopping at thrift stores, squeaking by from month to month, and having little or no expectation of higher education.

In both cases, the expectations people grow up with tend to keep them in their financial comfort zones. These zones are artificial financial boundaries that we impose on ourselves, and they are not necessarily defined by what we can or cannot afford. Yet we become uncomfortable if we move too far outside them.

Certainly, people can and do expand their financial comfort zones. Children who grow up in low-income families, for example, may be able to get an education and go on to careers that bring them financial success far beyond that of their parents.

The real problems arise when circumstances unexpectedly push people out of their financial comfort zones.

I once had a couple inherit several million dollars. They had no idea Mom had that much money. All at once, they had the means to move into a much higher financial comfort zone. Yet their reaction was depression. They came into my office asking, “What is wrong with us?” We spent some time exploring their money beliefs and discovered their number-one money script was “Money we didn’t earn isn’t worth having.” Moving slowly out of their financial comfort zone by their own efforts would have been fine. Being shoved out of it by an unearned inheritance was a challenge.

It’s no wonder that many people, coming into unexpected wealth, unconsciously feel a need to get rid of it. It’s one way to get back into the familiar zone where they know how things work, they are comfortable, and they belong.

The same thing can happen to those in higher financial comfort zones. Suppose a high-earning professional couple, who are accustomed to an affluent lifestyle, lose nearly half their net worth in an economic downturn. Then one of them is laid off. They aren’t going to starve. In fact, they could scale back their spending a great deal and still live perfectly comfortably.

Yet this may not seem like an option to them. Changing their financial circumstances would move them out of the place they belong. It’s possible they may go into debt or spend down the assets they do have left, jeopardizing their financial future, in order to maintain a lifestyle that keeps them in their financial comfort zone.